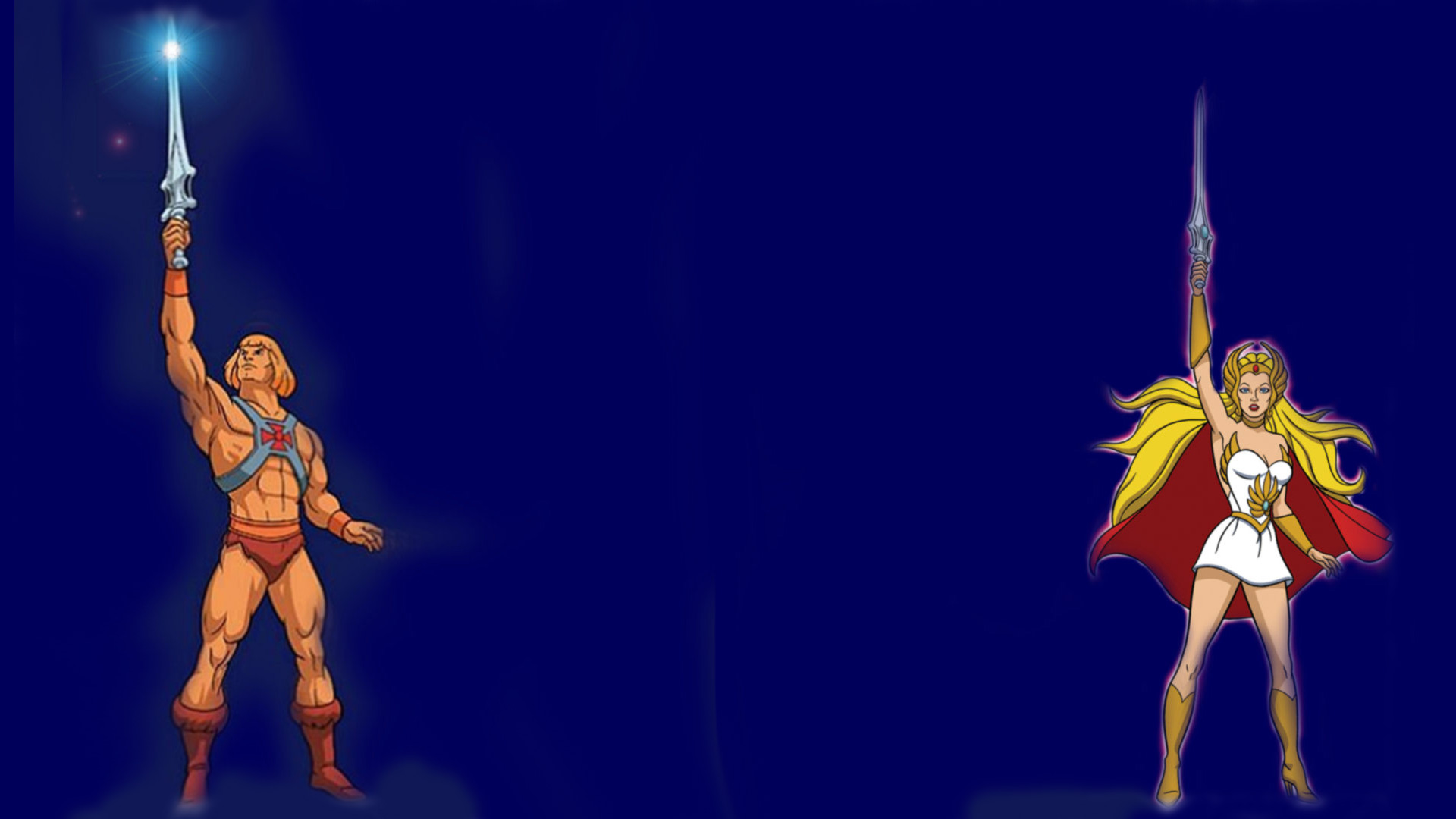 What's on your mind?

Kevin Smith provided an update on the upcoming animated series Masters of the Universe: Revelation (the sequel series, not the other prequel series).

Smith provided the update in his Fatman Beyond podcast, and Bleeding Cool has a summary here:

Really looking at the original power sword its More something for a princess of power rather than a barbarian warrior prince, Do not get me wrong it does have a bit a resemblance to the iconic CTB Atlantian sword which i believe was intentionally done, however, I liked the 2000's Reboot sword of power better. because it also had a gimic were when not channeling King Greyskulls power it kinda looked like the original power sword but when channeling the power it transformed into something with a different guard thus better protecting He-mans secret identity as prince adam...then again in the original show it was a Clark kent kinda thing.

So here's hoping we get to see a sword befitting a barbarian king in the 2020 Netflix reboot...however it would be kinda cool if they had He-man using an ax instead of a sword.

Which sword of power did you prefer to see He-man welding?

I made a free account and pulled it up. Ah, memories. 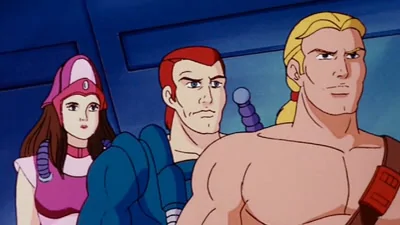 Was i the only one I was thinking that this incarnation of She-ra was going to be showing up in the He-man reboot?

I'm starting to know the Tri-Solar System, and the only planets I know so far in it are Denebria and Primus. Does the original Solar System consisting of Mercury, Venus, Earth, Mars, Jupiter, Saturn, Uranus, and Neptune exist in the Masters of the Universe/He-Man universe?

I've never watched the episode(s) Trolla was in, but I've watched Quest for He-Man, and only the environment of Trannis is seen. What does the planet look like (besides the environment)? Also, what does Trolla look like? 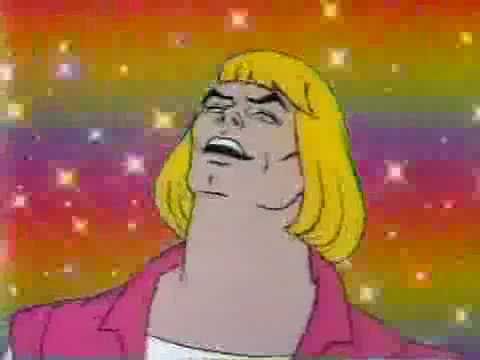 "Teela's biological father is never revealed; Man-At-Arms says he was one of Eternia's greatest men. In the episode it is stated that he died in the war, protecting Eternia."

"he would die defending his kingdom from a subsequent campaign waged by Hordak."

Of course I'm sure that many people died during that, so it could just as easily have been an ally of Grayskull's.

Plus it's not entirely clear that this is "the war protecting Eternia" that Duncan was referring to. Had there been other wars after that?

Grayskull apparently reigned ~500 years ago (so Hordak is pretty old, unlike Skeletor, who is somewhere between Miro and Randor's age) so to have fathered Teela would make Teela Na pretty old herself...

Does anyone know if there's any indication how long Teela Na was around for?

To have handed Teela over to Duncan rather recently though might mean that Teela Na could've had Teela in stasis (frozen as a baby for centuries) until she found someone worthy of taking care of her (Duncan) or else the death of Teela's dad might've been in a more recent war.

Given that King Grayskull was married to Queen Veena (the 1st sorceress) that might potentially cause some complications, unless perhaps Hordak killed her prior to killing Grayskull? Still, I imagine Kuduk Ungol (2nd sorceress) might have something to say about the 3rd sorceress hooking up with the king...

Maybe if Grayskull was Teela's dad, Grayskull and Teela Na never actually met? Like maybe they just froze his essence and then used it to conceive Teela immaculately? That seems to line up with her being a somewhat messianic figure cloned from the Goddess in the original comics...

What if Teela Na was merely a surrogate mother and the egg actually came from the Goddess or maybe the 1st sorceress Veena?

We know that Adam's son Dare is eventually the last man to don this mantle, but was he the 2nd or the 3rd to do so?

There is a SEEMING contrast at https://books.google.ca/books?id=rbmvDgAAQBAJ&pg=PA392

He-Man and the Masters of the Universe: A Character Guide and World CompendiumGoogle Books

We know the first He-Ro was a man named Ro who took up the "Sword of He" to battle "Horde Prime". After amnesia he was adopted by Eldor who nicknamed him "Gray". We know that Ro/Gray the 1st He-Ro (per 2008 MOTU Classics) died SAVING King Grayskull.

The King Grayskull that he saved was D'Vann Grayskull, to whom Ro passed on the "Sword of He".

2012 DC MOTU COMICS has this descrip:

>In contrast to other depictions, the 2012 DC comics established He-Ro as the lone surviving son of King Grayskull and Queen Veena.

>He led the resistance against Lord Adi and the Gar after his father's death.

>Upon recovering the Sword of Power, he and Eldor chose to hide it away until destiny revealed the rightful heir.

The "rightful heir" in this case would be He-Ra, since SHE is the next person to wield that sword.

I would argue that there is actually NO CONTRAST AT ALL. Simply because this could be an ENTIRELY SEPARATE version of He-Ro. More specifically: I think the 2012 He-Ro could actually be the SON of D'vann Grayskull and Queen Veena.

We know that He-Ro also had a son (though it's unclear who the mother was) because that son married the daughter of D'vann and Veena (my pet theory is that this daughter could have been Kuduk Ungol) and together they had a daughter who became He-Ra.

IE this would mean that the 2nd He-Ro and Kuduk Ungol were brother and sister, much like Adam+Adora. Maybe they were even twins!

That would mean that the un-named son of the 1st He-Ro probably filled a role similar of what Sea Hawk played to Adora: being Kuduk's boyfriend eventually He-Ra's father.

If the 2nd He-Ro was the son of D'Vann that would make complete sense:

We know that He-Ra gets the sword later. Most likely from her UNCLE, the 2nd He-Ro, who was probably friends with the 1st He-Ro's son (whose name we do not know)

He-Ra being the daughter of Kuduk Ungol would also work out in an interesting way. What if He-Ra was actually the transformed version of Teela Na before Teela took over for Kuduk Ungol as the sorceress?

You can say "but wait: Kuduk Ungol never gave any indication that she was Teela na's mother!"

That's all well and true, but in most episodes, Teela Na (3rd sorc) doesn't give any indication of being Teela's mother anyway. The current Teela (Adam's girlfriend) is basically ignorant of that (mindwiped) and thinks Duncan (Man at Arms) is her biological father... so wouldn't it be ironic/appropriate if the very same thing that was done to current Teela by Teela Na was also done to Teela Na by Kuduk Ungol?

Of course: if He-Ra actually was the prior identity of Teela Na, since we know that He-Ra is the ancestor of Adam/Adora (and we know she isn't their mom Marlena) and since we know that the royal lineage comes through Randor's father Miro, this could mean that Teela Na is Randor's mom (making current Teela Randor's sister and Adam's aunt) or that Teela Na is Miro's mom (making her Randor's aunt and Adams' great-aunt).

500 years is a lot of time for intermediate generations though, so that's a LOT of speculation about direct lineage, and hinges on assuming that the 'sorceress' role is passed down mother>daughter (based on Teela Na being destined to give it to Teela). 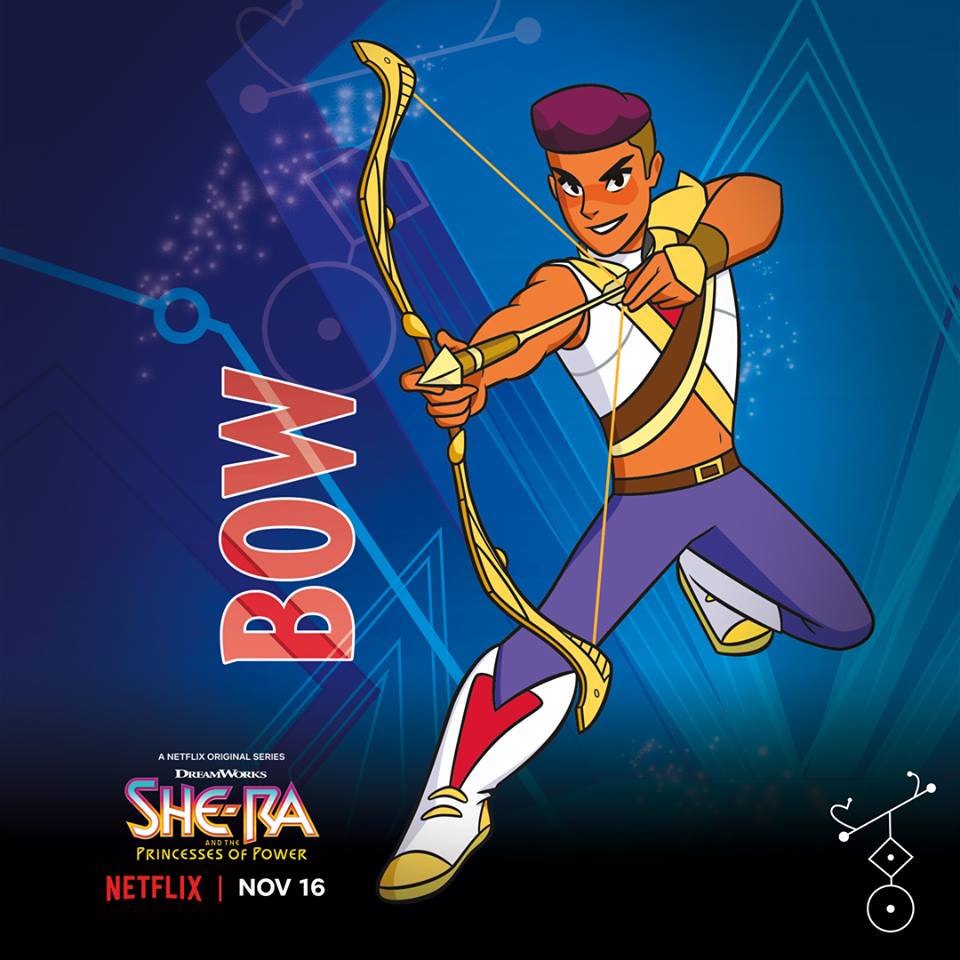 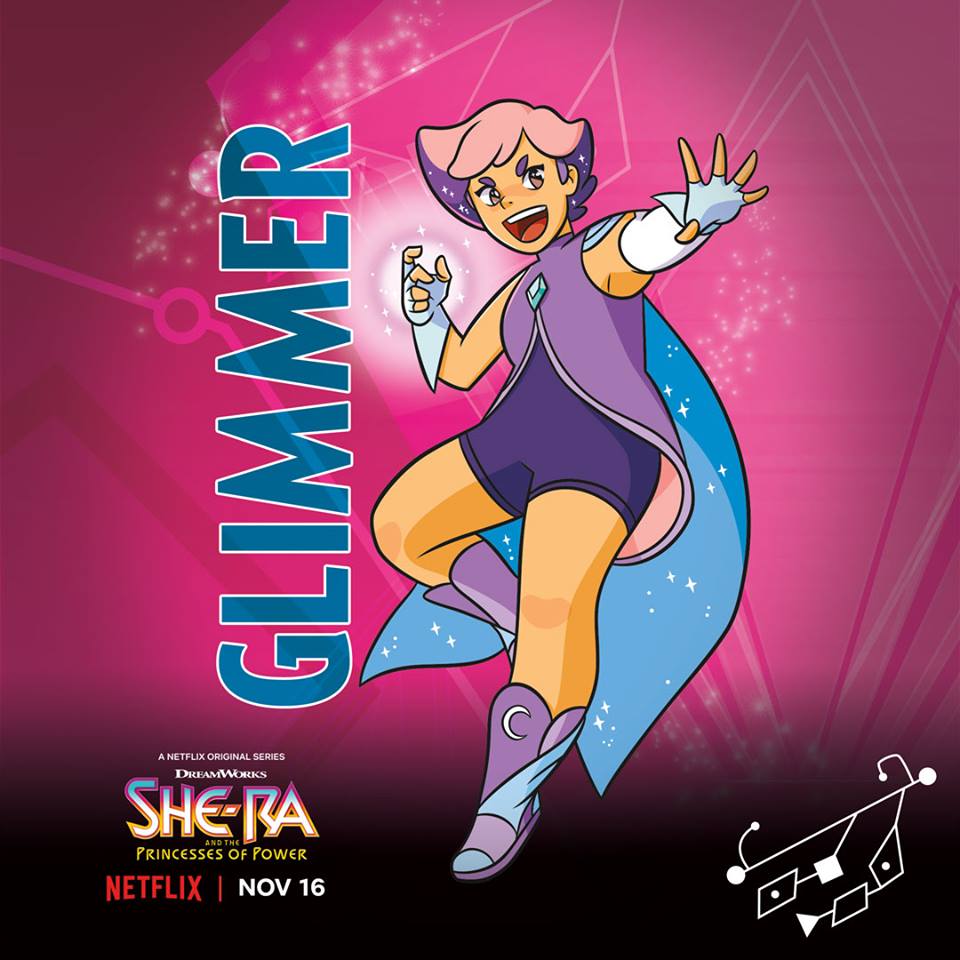 Glimmer (She-Ra and the Princesses of Power) 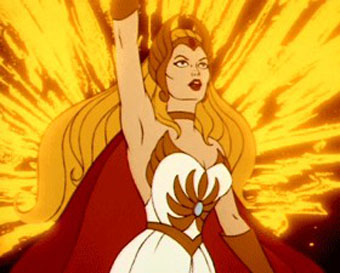 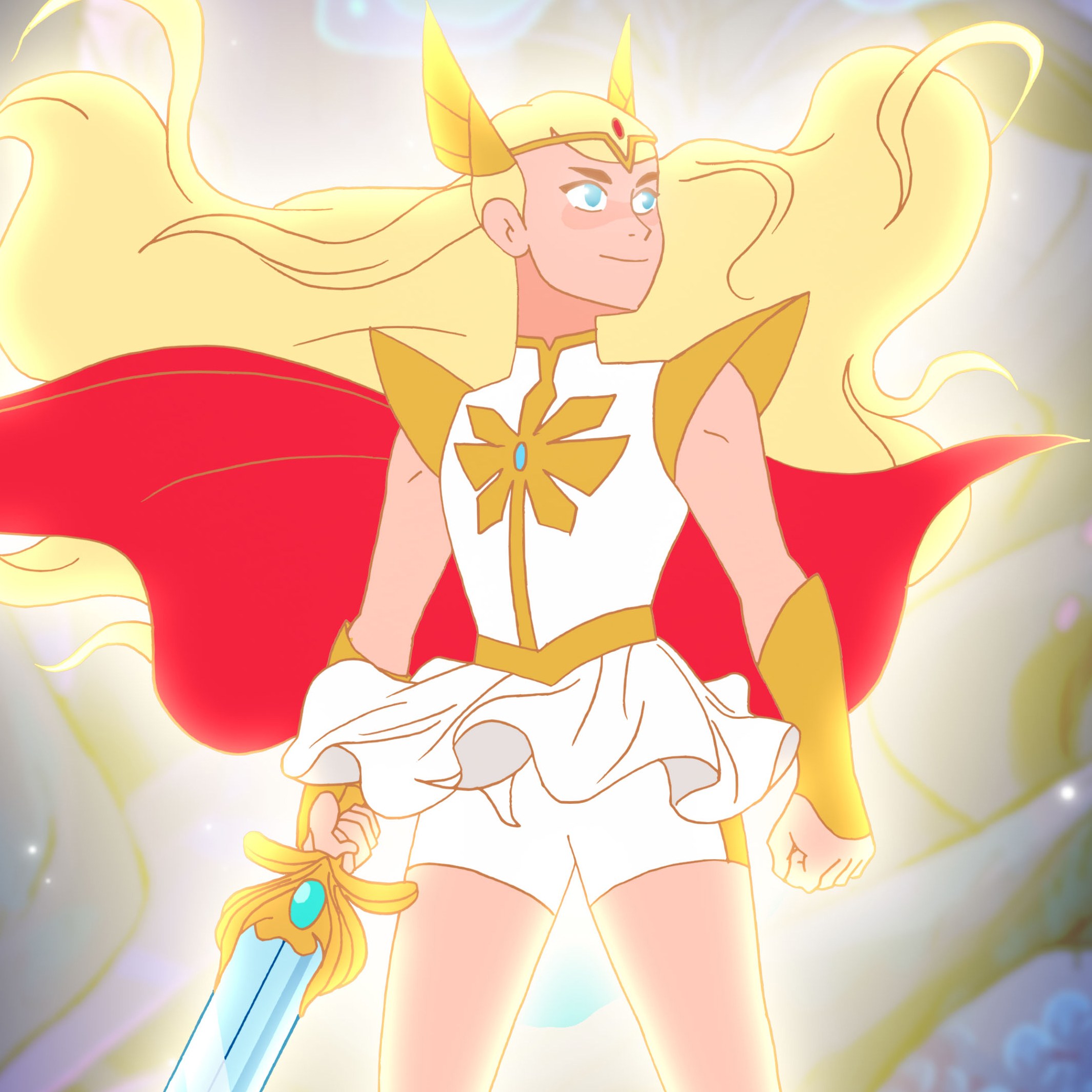 Since splitting up the articles has become unavoidable, I think we should at least organize how to do it.

My suggestion is to keep the "main" carácter pages not as disambiguations, but as informative articles from the "real world" perspective, which most already are, but having under each sub-title a link to the specific versión page, which would be written as sort of in-universe biographies, yet with the issue/episode referenced.

While I'm not sure about all categories, I guess a few can be named after their publishers. For example:

* 200x (it wouldn't be named Mike Young Productions because the 200x continuity was franchise-wide, with all tie-in material being in the same continuity)

Hi! This is my first post:} I read that if the 2002 He-man series hadn't been cancelled, She-ra would've been in Season 3. Well, I was thinking that if that happened, a nice change would be to have Teela become She-ra. Who agrees?

Sure she appear in both Marvel & DC comics, but she does make a good marvel hero. It could be a crossover with Thor, Dr. strange or even better, spider man. 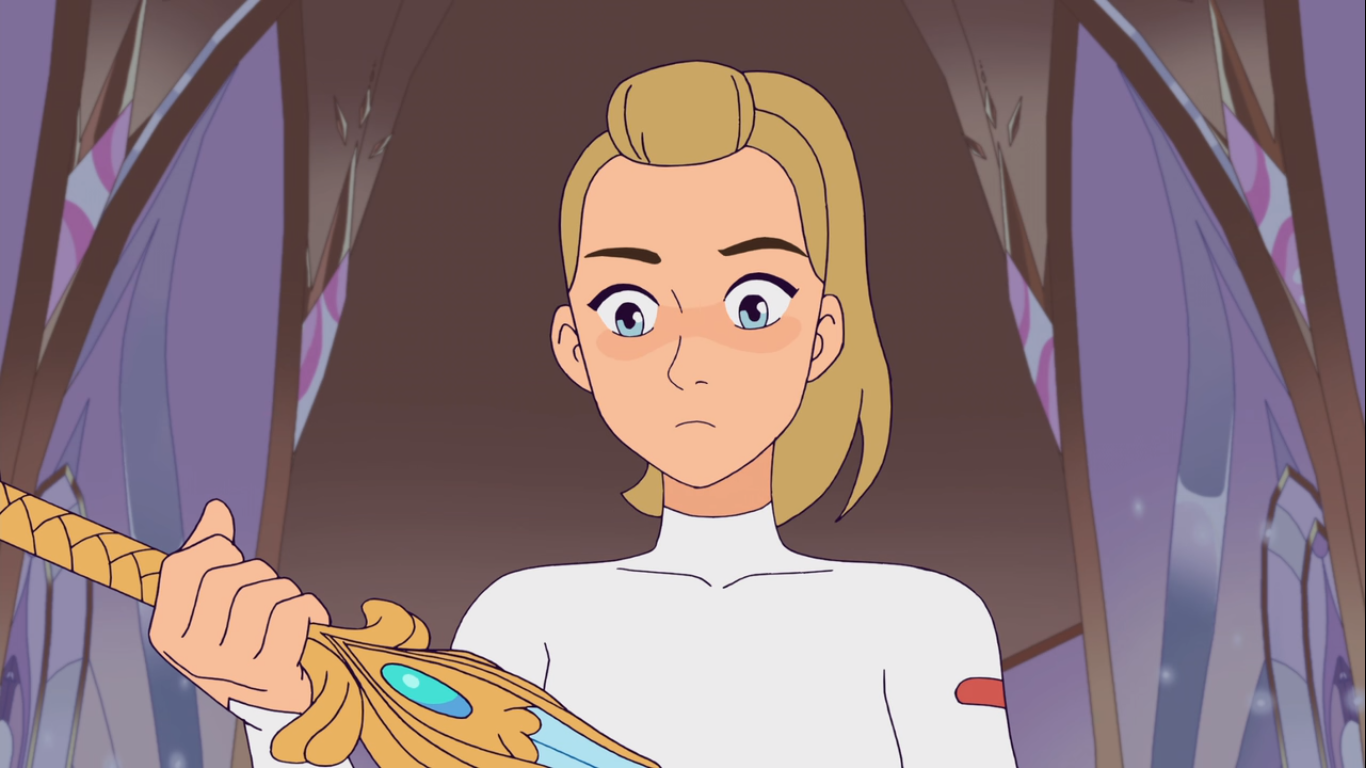