Bow is one of the main characters in the Netflix Original series She-Ra and the Princesses of Power. A member of the Rebellion, Bow is their resident technology master and highly-skilled archer. He will do anything to protect his friends, and is driven by loyalty and the need to do what is right and stand up for what he believes in.

All that is known of Bows previous life is that he was raised by two fathers and has known Glimmer for quite a while.

Bow is an extraordinarily caring and warm person. He has been shown to have a deep love and respect for those he cares about, and is easily able to connect with people around him. He's social and popular, as he enjoys talking to many people whenever he gets the chance to, even striking up conversation with Adora when she was his and Glimmer's captive. On top of that, many people he meet tend to take a quick liking to him, such as Angella and Castaspella, among others.

He wants the best in everyone and to make sure everyone is happy, oftentimes acting as the peacemaker in most situations. His almost childlike tendencies can make him seem a bit naive at times, but when it boils down to important situations, he can handle himself easily and effectively.

He is able to tell the difference between right and wrong, and when he knows he is right, he isn't afraid to stand up for himself and those around him. On top of this, he has a technical mind perfect building machines and equipment, which he shows no lack of passion and dedication for.

It is unknown exactly how long Glimmer and Bow have been friends, but it is very apparent that they are incredibly close to each other. Contrasting with Bow's upbeat and caring attitude, Glimmer has a tendency to be suspicious and agitated very easily, as well as being incredibly stubborn, unlike Bow's peacemaker attitude. However, they are both incredible and great friends who care deeply about each other and have cared deeply about each other for quite some time, and are willing to do as much as possible to help each other.

Much like Glimmer, Bow cares very deeply about Adora as his friend. He doesn't care that she used to be a member of the Horde and did not take long at all to warm up to her, showing her affection with open arms. He thinks of her as one of his good friends and gladly shares in happiness with her.

Bow is a master archer and a master of weapons and technology. Bow is also a tech genius and designs his own trick arrows and gadgetry. Among his trick arrows are the sonic arrow, stun arrow, net arrow, emergency flare arrow, and sticky goo arrow. Bow has also been shown to be competent at combat even without his arrows.

Bow wears white, gold, and red battle armor and is armed with a collapsible bow that he uses to fire a variety of trick arrows. He also carries a tracker pad that senses energy signatures of magic, including those of First Ones’ technology.

Maker: he show captable of craft other thing aside weapons and divise. like the miniatures of She-Ra, Glimmer and himself. 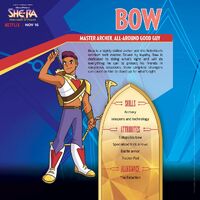 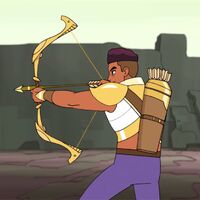 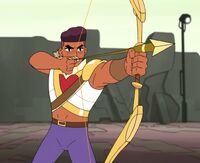 Retrieved from "https://he-man.fandom.com/wiki/Bow_(She-Ra_and_the_Princesses_of_Power)?oldid=34016"
Community content is available under CC-BY-SA unless otherwise noted.