Wiki Grayskull
Register
Don't have an account?
Sign In
Advertisement
in: Characters, Females, She-Ra and the Princesses of Power characters,
and 7 more

The Horde (formerly)
The Rebellion

Catra is the deuteragonist as well as the secondary antagonist of the Netflix original series She-Ra and the Princesses of Power.

Unlike her counterpart in the original series, Catra is naturally born with cat features and often acts just like a cat. She is physically superior to a normal human, able to hold her own against She-Ra. Catra is a member of the The Horde and grew up with Adora. The two shared a close bond and when Adora abandoned the Horde and joined the Rebellion, Catra felt a deep betrayal. However, Catra soon comes to realize that Adora's defection is a boon for her, allowing Catra to step out of Adora's shadow and climb the ranks. She takes Adora's rank of Force Captain, and quickly gains both the support and approval of Lord Hordak. She starts to lose this later on in Season 2.

She is voiced by AJ Michalka.

As a child she was taken into the Horde, along with Adora, under Shadow Weaver. As she was growing up, she was always placed second best to Adora and Shadow Weaver herself said that that she was only kept in the Horde because Adora liked her. Shadow Weaver was always obviously more biased towards Adora, and punished Catra severely for a misdemeanor whilst leaving Adora unharmed. Shadow Weaver also stated that Catra is a nuisance and that she herself would take out Catra if she ever crossed the line. Despite this, Catra and Adora grew to have an extremely close bond. Adora provided Catra with support for the majority of her life, protecting her from bullies (including Shadow Weaver) and becoming her only friend.

As she grew older, Catra maintained a very aloof, almost delinquent-like persona. She routinely fought dirty during training when she bothered to attend at all. This led to at least some apparent resentment from her fellow cadets. Catra also often hid her jealousy of Adora, stating that 'second best suits [her] just fine' when she saw Adora's Force Captain badge.

After Adora left her for the Rebellion, she became extremely hurt and constantly seeks out Adora in direct confrontations during battle. She becomes Force Captain and quickly becomes one of the most ruthless people in the Horde.

For as long as she can remember, Catra has longed to be free, and wishes to see the world and know what dwells beyond the Fright Zone's borders. Her curiosity of the world, however, isn't enough to persuade her from her inclination to doing things her way. She's often late or absent to important events such as meetings and tests and elects to take the easy way out instead of putting forth actual effort. She refuses to respect authority and resents people who see her as weak and unworthy. She has a very headstrong and stubborn nature and refusing to give up or relent when she is focused on a goal. Additionally, Catra is shown to be incredibly manipulative. Catra's whole life has been dedicated to proving that she is better than her former friend Adora, whom she'd previously been overshadowed by. Nevertheless, Catra is not without a heart. She cares for people, especially Adora. She was raised alongside Adora, which is why her betrayal wounds Catra so much. Catra trusted that her friend would return to her; however, Adora left her.

One of Catra's biggest flaws is that of her need to be accepted. When Adora chooses to stay with complete strangers over her, it breaks Catra's heart. Adora was Catra's only friend, and when she leaves none of Catra's team members even tolerate Catra. It is implied that Catra is jealous of Adora; Shadow Weaver even admits that the only reason she kept Catra was that she was friends with Adora, and Shadow Weaver never wanted Catra to be a captain in the first place. Catra seems to want to please both Hordak and even Shadow Weaver, for fear of not being accepted.

The longer Catra goes without Adora's influence, the more her dominant traits overpower her. Her need for approval, her curiosity, her rage at being abandoned, and her fear that she's not good enough begins to meld into an angrier, darker Catra. She'll always love Adora, but she'll always resent her for standing in her way.

Catra and Adora were very close as children. However, their friendship was often strained on the subject of Adora being Shadow Weaver’s favorite, and Catra’s belief that Adora meant for her to live in her shadow. Despite this, the two happily shared fond memories growing up. However, Adora served as the chain that brought out the good side of Catra. Catra respected and cared for Adora to the point where she was bitterly hurt and betrayed when Adora chose to stay with the Rebellion over her. This belief began the campaign for Catra’s claw to power. Interestingly enough, Catra would not openly hate Adora, simply resenting her for standing in her way.

Catra lived most of her life competing against Adora, trying to prove herself as better than second best. She spent a very long time hiding her true feelings for Adora's successes and her losses, pretending she didn't care. At the same time, Catra very obviously wanted to succeed herself instead of losing to Adora. Thus, when Adora abandoned the Horde, Catra saw it to mean that all her work didn't matter at all. To Catra, Adora's betrayal of the Horde was essentially a way to tell her that, not only would Catra always be in her shadow, she didn't even care.

Catra’s relationship with Shadow Weaver is based on complete disrespect and outward hostility. Since she was a child, Catra was often victim to psychological and possibly physical abuse from the sorceress; an example of this is when Catra and Adora wandered into the room with the Black Garnet as children and were caught by Shadow Weaver. Catra's life was threatened whereas Adora only received a pat on the head and a gentle warning. Because this was regular treatment for Catra, she harbored deep hatred for Shadow Weaver, vocalizing it by calling her names like “Old woman“ and “Old lady” (to her face). Because Shadow Weaver openly voiced her disdain of Catra’s performances to try and please her, and also made it clear that Adora was her favorite. Outside Catra does not think much of the sorceress, but somewhere deep inside she considered the sorceress a mother figure despite her cruelty; this was shown when Catra desperately wanted to find a way to keep Shadow Weaver from being sent to Beast Island. Catra did get her revenge eventually, when she destroyed her mentor’s Black Garnet absorber embedded in the mask and severed her ability to absorb power from the Rune Stone. Catra rose in the Horde ranks after that. But Shadow Weaver manipulated Catra in to providing her the means to regain some of her powers and esape the Fright Zone. Catra attempts to cover her mistake, she ends up being subjected to Hordak's gravity generation device after she failed to confess.

Catra and Scorpia’s relationship did not go off with a great start because of Scorpia’s overwhelmingly perkiness, and Catra’s annoyance with the latter’s upbeat attitude. She had to constantly remind Scorpia of her personal boundaries and reminders about what not to do to irritate her. In season 2 Catra is shown slowly opening up to Scropia as she begins to validate and confide in Scropia. In season 3, their journey through the Crimson Waste resulted in the two growing close. The two aided and supported each other throughout their journey, and during their time together Catra was the happiest she's been since Adora left the Horde. Catra and Scropia made plans to stay together and rule the Crimson Waste, but after her confrontation with Adora, Catra became cold and threw away her relationship with Scorpia. Catra became hostile towards Scropia, and even threatens Scropia should she get in her way.

Because Entrapta is a princess, and Catra’s lifelong mental-programming that princesses are evil, Catra treated Entrapta as a prisoner. However, after finding out that Entrapta was a highly technologically-advanced figure, Catra manipulated the princess’ pain after unwillingly being left behind by her friends to make her begin to experiment with Horde equipment and First One’s tech. They ultimately became sidekicks in the attack on Bright Moon to weaken all the other Runestones. Catra and Entrapta begin to work with Hordak on ancient technology, but Catra becomes jealous of Hordak and Entrapta's growing bond. After Hordak concludes that Catra was defective, Catra becomes even more jealous of Entrapta, and shows hostility towards her. After Entrapta attempts to stop the portal from being used, Catra shocks her with a weapon and sentences her to banishment on beast island, which means certain death.

Catra has catlike agility and swiftness, being able to flip, back flip, jump, and climb with much more ease than the average person. Her partially retractable claws are her main weapons, and she uses them to slice at enemies or stop herself from falling off steep surfaces. She has claws in her feet as well which enhance her grip when climbing.

Catra has natural claws that she uses for most of her fighting. She is also seen wielding stun-staffs and heavy horde machinery. Her attire allows for more agility rather than defense, and she lacks shoes so she can use the claws in her feet. 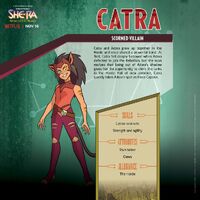 Revenge is a dish best served hot and bitter.