Cringer is the "fearless" friend and pet cat of Prince Adam. When Adam must defend Eternia by transforming into He-Man, he can use the same power to turn Cringer into the mighty Battle Cat. Although Battle Cat is a brave and powerful warrior in the fight against evil, Cringer is a lazy, craven beast, who often flees from the first sign of danger. Despite being a total coward, he is totally loyal to Adam, and has even put himself between Adam and danger.

Like He-Man, Battle Cat originally had no dual identity, and the concept of Cringer was introduced alongside that of Prince Adam. Although Cringer is largely irrelevant to the main action of most Masters of the Universe stories, he adds an extra dimension to the character of Battle Cat.

Battle Cat's alter ego first appeared in the stories written by Paul Kupperberg for DC Comics. Although he is certainly a coward, he is less motivated by fear than a simple desire to find peace and quiet. Cringer can speak, and does so frequently to complain about the commotion in the Royal Palace or his duties to the Goddess. When summoned by Zoar, Adam and Cringer must visit the Cavern of Power, whereupon they are instantly transformed into He-Man and Battle Cat.

In The Key to Castle Grayskull, Battle Cat remarks that the jungle he and He-Man are exploring is his birthplace, where he spent much of his youth, presumably as Cringer. He was not present during the events that first caused Adam to become He-Man, and did not join the hero as Battle Cat until much later. Cringer himself wonders aloud how he was chose him for such work, suggesting that he himself does not understand his qualifications.

In He-Man and the Masters of the Universe, the Cringer character is further refined, serving alongside Orko to provide comedic relief. Cringer is rarely depicted doing anything except eating, sleeping, or complaining; he is always afraid and eager to avoid trouble.

The cartoon introduces the premise that Adam must raise the Power Sword and summon the Power of Grayskull to transform into He-Man. As He-Man, he fire a blast of power from the sword to at Cringer, causing him to grow and change into the fearsome Battle Cat. As demonstrated in Temple of the Sun, He-Man can do this at any time, not just during his own transformation. Cringer is terrified of being turned into Battle Cat, and frequently tries to talk his way out of it--on occasion he has simply fled to escape the power. In one episode, the blast from the sword bounces off a wall in a cave as the fleeing Cringer was turning a corner, changing him into Battle Cat anyway.

At times Cringer seems to resent Battle Cat, although he reluctantly admits that his alter ego is good to have around when he's needed. Once he has become Battle Cat, however, he is not so philosophical, and does not tend to weigh in on his dual nature. It is nevertheless clear that Cringer and Battle Cat are of one mind and share certain priorities. When Moak takes Cringer's steak in The Gamesman, Battle Cat is extremely angry at the creature for eating "my dinner." Similarly, Cringer blushes at Kittrina's admiration for Battle Cat in The Cat and the Spider.

In the stories based on the 2002 relaunch, Cringer does not speak and is presented as a mere pet, albeit an intelligent one. He does occcasinally manage to display great courage in times of crisis. In The Courage of Adam, he and Orko are tasked to rescue Adam from Snake Moutain, and Orko casts a spell on Cringer to make his fur resemble that of Panthor, despite the fact that Panthor is far larger and more muscular than him. On at least one other occasion, Cringer saved the life of Adam, facing great danger of his own. 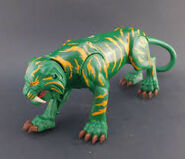 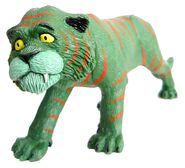 MOTU Classics Cringer
Add a photo to this gallery
Retrieved from "https://he-man.fandom.com/wiki/Cringer?oldid=42148"
Community content is available under CC-BY-SA unless otherwise noted.