watch 02:03
Wiki Targeted (Entertainment)
Do you like this video?
Play Sound

For the artifact of the same name, see The Diamond Ray of Disappearance

Diamond Ray of Disappearance is a first season episode of the animated television series He-Man and the Masters of the Universe, produced in 1983. It was the first episode to be screened (airing on September 5, 1983) but was the fourth episode in the production order.

The episode focuses on Skeletor's discovery of the legendary "Diamond Ray of Disappearance", a jewel that sends who or whatever it is aimed at into another dimension.

"Diamond Ray of Disappearance" was written by Robby London and directed by Lou Zukor and despite its place in the production order it is made clear on screen that it is intended as an introduction to the show. At the beginning Skeletor summons many of his recurring minions to Snake Mountain and introduces them to the audience. Despite this introduction to the forces of evil, no such introductions are given to the heroes, although Stratos and Ram Man are both brought in for the final confrontation so that all of the main characters can be introduced.

Within Snake Mountain, Skeletor introduces Beast Man to his latest acquisition, the Diamond Ray of Disappearance. Skeletor then commands his minion to activate the Transport Beam, a ray that teleports the rest of Skeletor's warriors to the fortress. Once Mer-Man, Evil-Lyn, Tri-Klops and Trap jaw have arrived, Skeletor demonstrates the specific powers of the Diamond Ray by making a nearby creature vanish, before informing the Evil Warriors that he will use the ray to take over Eternia.

Meanwhile, at the Royal Palace, Orko is entertaining King Randor, Queen Marlena, Prince Adam, Man-At-Arms and Teela with his egg trick. Teela hears laser fire and rushes to the window, where she spies Trap Jaw on a War-Sled attacking the palace. While Teela and the Royal Guard pursue Trap Jaw, Prince Adam and Cringer leave the palace and transform into He-Man and Battle Cat. Teela confronts Trap Jaw, who soon gets the upper hand until He-Man arrives and defeats the villain by destroying his current arm attachment.

Meanwhile, Skeletor and his forces launch an assault on the now-defenseless Royal Palace. Skeletor demonstrates the Diamond Ray on a nearby falcon, not knowing that it is Zoar, before sending Man-At-Arms, King Randor and Queen Marlena to another dimension; only Orko manages to escape to warn He-Man.

He-Man journeys to Castle Grayskull and contacts the Sorceress through her magic viewing glass. She reveals that the Diamond must be crushed, just as the Evil Warriors manage to break their way into the castle. He-Man holds off the Evil Warriors with the aid of Battle Cat until Teela, Ram Man, and Stratos can join him.

The Evil Warriors fall one by one at the hands of the Heroic Warriors, but Skeletor keeps a safe distance. After destroying a horde of Hover Robots, He-Man confronts the villain, and when Skeletor attempts to use the Diamond Ray on him, deflects the blast with the Sword of Power, causing Skeletor to drop the diamond into a crevice in the ground. He-Man widens the crack and pulls out the magical stone. He begins to squeeze it, but starts to fade into the other dimension. Just in the nick of time, he manages to break it; He-Man returns to normal and his friends are safely transported back to Eternia. Skeletor leaves, vowing revenge.

Much later at the Royal Palace, everyone is waiting for Prince Adam to come to the throne room on time. Unfortunately, he rides in on a broken Zoom Chariot, making a sizable hole in the palace wall.

He-Man: "In today's story, Skeletor was looking for a shortcut, a quick way to riches and power. You may know some people like that, always looking for a quick way to get ahead of everybody else. Well, it doesn't work that way. The people who succeed are the ones who work for what they want. So don't be fooled by those who say they have a sure thing. There's always a catch to it. Don't sell yourself short. The right way is the best way. Until later." 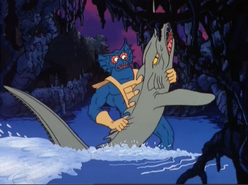 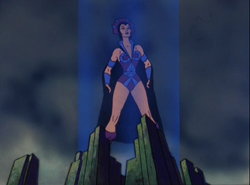 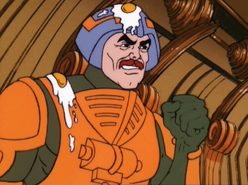 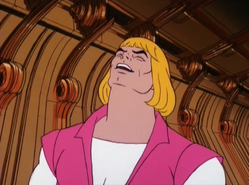 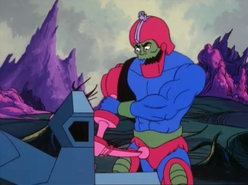 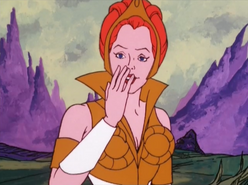 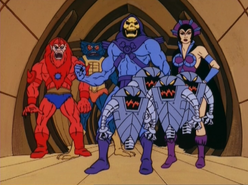 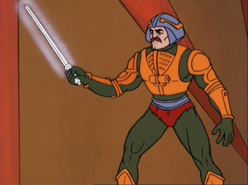 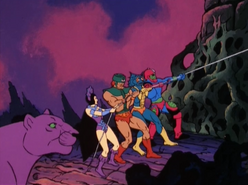 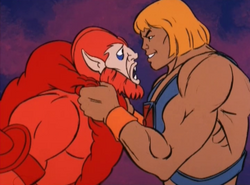 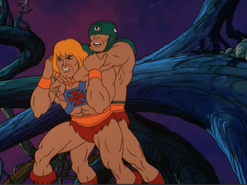 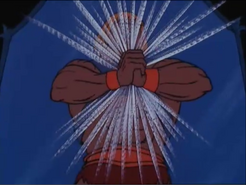 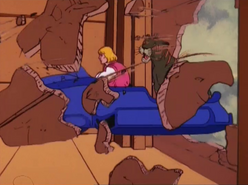 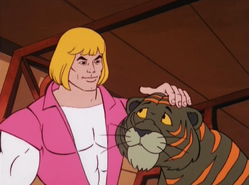 Retrieved from "https://he-man.fandom.com/wiki/Diamond_Ray_of_Disappearance?oldid=35649"
Community content is available under CC-BY-SA unless otherwise noted.