"The Shadow of Skeletor"

Disappearing Dragons is the 79th episode of He-Man and the Masters of the Universe, written by Larry DiTillio and directed by Ernie Schmidt. Granamyr seeks He-Man and Orko's help in recovering his dragons, which have been captured by Kobra Khan and Webstor. This episode also marks the first appearance of Mekaneck and Kobra Khan in the series.

At the Royal Palace of Eternia, Orko is losing (despite help from Cringer) a game to Prince Adam when they sight Zoar circling overhead. Adam receives a telepathic signal from the Sorceress, advising him that Granamyr has urgently requested help from He-Man. Adam resolves to immediately answer the summons.

Later, He-Man arrives in Darksmoke via a Wind Raider, having brought Orko along on his first trip to the realm of the dragons. While awaiting Granamyr in his chamber, Orko becomes fascinated with the assorted treasures and runs afoul of a bottle containing a monster. When Granamyr emerges from his pit, Orko ingratiates himself upon the dragon, to Granamyr's annoyance. The dragon lord explains to He-Man that dragons have been mysteriously disappearing throughout Dragon Mountain. Having been asked by the dragons to do something, Granamyr found that his magic could not reveal an answer; he now hopes that He-Man, being wiser than most humans, can conduct his own investigation. Granamyr promises to come to He-Man's aid whenever his name is called. To cover the vast territory of Dragon Mountain, He-Man decides to contact reinforcements.

Mekaneck and Buzz-Off soon discover Kobra Khan and Webstor attempting to capture a dragon with a transporter ray. The two heroes distract the villains long enough for the dragon to escape, but are themselves subdued. He-Man and Orko arrive just in time, but when Orko tries to destroy the transporter ray, it goes haywire, teleporting everyone else away before breaking down.

He-Man, Mekaneck, Buzz-Off, Webstor, and Kobra Khan materialize on planet Mero, in another dimension. The two villains recognize their surroundings and flee to the city where the Darmi reside. He-Man and his friends follow them in search of answers. The three heroes come upon the prison in which the missing dragons have been kept. They are confronted by the Darmi, who have been told He-Man means to stop the games that the dragons are to be used for. He-Man attempts to reason with them, but when he is resolute that the dragons must be freed, the Darmi imprison him and his friends in an impenetrable force field and take them to their arena.

The Darmi - Verdor, Kara, and Bylon - explain that Mero was once a powerful and glorious world until it and its populace were devastated by a great war; only the three of them remain. The only pleasure left to the Darmi is their ancestral tradition of betting upon gladiatorial combat, but they have run out of interesting competitors for their games. Recently, however, Kobra Khan visited Mero and offered to provide them with Eternia's dragons, in exchange for the means to conquer Eternia. The heroes are disgusted at the prospect of treating living beings in this manner, so Verdor (at Kobra Khan's suggestion) offers to let He-Man battle in the games for a chance to free the dragons. He-Man accepts this challenge.

Meanwhile, at Dragon Mountain, Orko struggles to repair the transporter ray when a dragon threatens him. Orko tries to explain that he is working on behalf of Granamyr, who suddenly appears at the mention of his name. Orko explains what has happened, and so Granamyr instantly restores the transporter ray with his magic.

Later, on Mero, He-Man faces the Darmi's champion, a towering robot named Bellatron. The Darmi bet upon the outcome of the contest; Mekaneck and Buzz-Off cheer on their friend, still trapped in the force field. The battle is evenly matched until Bellatron catches He-Man in a pair of rays designed to sap his strength. With He-Man sufficiently stunned, Bellatron moves in for the kill. Just then, Granamyr and Orko arrive to separate the two combatants; Kobra Khan and Webstor decide to escape in the confusion. Recovered, He-Man finishes off Bellatron with a single punch. The Darmi accuse He-Man of cheating and refuse to honor their agreement. Once their role in the theft of the dragons is clear, though, Granamyr wastes no time in turning the Darmi to stone. Freed from the force field, Mekaneck has no trouble picking up Kobra Khan and Webstor's trail. The two villains try to get away in a Darmi attack vehicle, but when He-Man throws a boulder into their windshield, they crash into a ravine.

When He-Man and his friends return with their prisoners, they find Granamyr and his dragons holding court over the restored Darmi, who plead for mercy. Granamyr decides that since the Darmi wanted dragons to fight for their amusement, he shall force them to fight for the dragon's amusement. He-Man interrupts his judgement, persuading Granamyr that if he does to the Darmi what they would have done to his race, he would be no better than they. Granamyr is impressed with He-Man's wisdom and spares the Darmi, instead ordering his dragons to destroy the gallery. He-Man advises the Darmi to use their power to rebuild Mero, and then returns with his allies to Dragon Mountain.

At Darksmoke, Granamyr thanks He-Man for his help in rescuing the dragons. Orko points out that he helped He-Man and deserves something in return. Granamyr agrees and "rewards" Orko with another encounter with the bottled monster as He-Man has a chuckle at his friend's expense.

He-Man: "In today's story we met some people who had a strange idea of fun. To amuse themselves, the Darmi wanted to make the dragons fight each other. Fortunately they didn't succeed. There are no dragons in your world, but there are animals. And hurting or teasing an animal is no way to have fun. Treat your animals with kindness. You'll find that's a lot more fun for you and for the animal. Until later."

As featured in BCI's He-Man and the Masters of the Universe: Season Two, Vol. 1 DVD boxset (Disc 2) 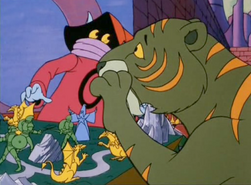 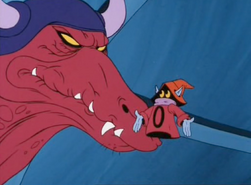 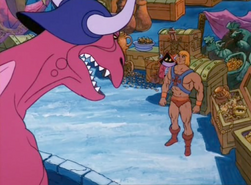 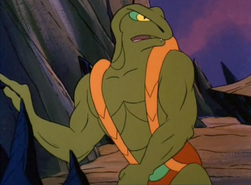 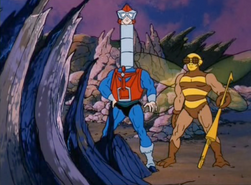 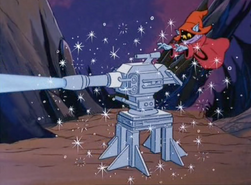 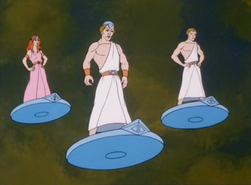 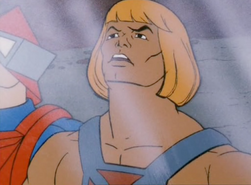 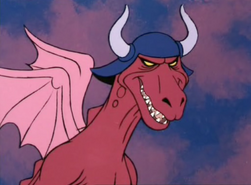 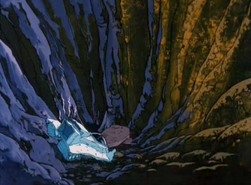 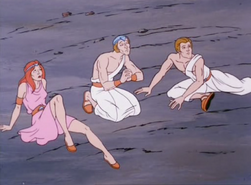 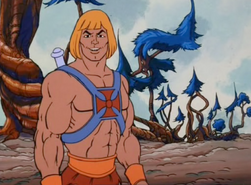 Retrieved from "https://he-man.fandom.com/wiki/Disappearing_Dragons?oldid=29969"
Community content is available under CC-BY-SA unless otherwise noted.