This article is about the animated episode. For the minicomic loosely based upon the same story, see Double-Edged Sword.

Double Edged Sword is the 42nd episode of He-Man and the Masters of the Universe, written by Robby London and directed by Gwen Wetzler. The episode appears in the Season One, Volume Two DVD set as the second on Disk 2.

A young boy, Chad, who was under the care of his disabled grandfather, dreamt of joining the Royal Guard and enjoying the glory of battle, until an attack by the Evil Warriors taught him the true cost of war. There was a mad rush by both the good and bad guys to collect the energy source eternium in the Sands of Time. Both sides invaded a neutral desert country for a rare mineral power supply. The young boy was attacked by a Spidasaur, a sea monster summoned by Mer-Man (despite being at the desert, there was a small lake, but seemingly deep enough for the Spidasaur), and He-Man came to the rescue. Trap Jaw then decided to eat some eternium to become as powerful as He-Man and convinced Mer-Man to help him get the eternium, promising to turn two thirds of Eternia into an ocean.

His strength greatly emplified by the eternium, Trap Jaw rumbled with He-Man, but his newfound powers wore off and he went in search for more. Chad's pet Burbie ingested the last piece instead, but it proved to be poisonous to the small creature, so He-Man took it to the Sorceress to help the pet get better. In the meantime, Chad's grandfather told him that was he formerly a soldier, but once used his Scatter Ray to scare some attacking orcs and his reckless shots made a mountain crumble on him, and that's what caused his legs to be paralised.

He-Man: "Sometimes movies and television adventure series like this one make it seem as though shooting a gun, fighting, and taking chances are fun and exciting things to do. And what's more, the good guys never get hurt. But in real life, people do get hurt, even killed, when they fight or use guns. Make believe can be fun, and there's nothing wrong with imagining great adventures. But never forget, that when it's the real thing, someone can get hurt. Even the good guys. Even you." 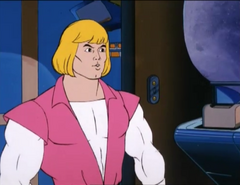 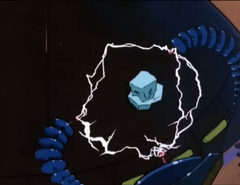 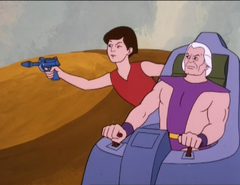 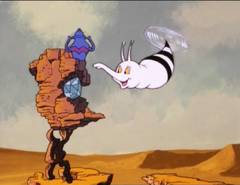 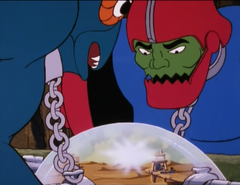 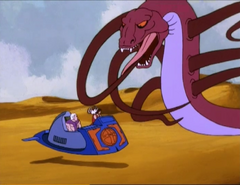 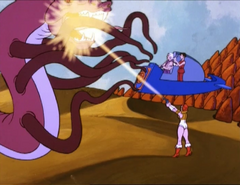 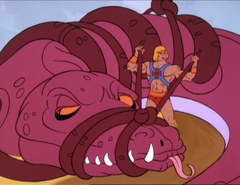 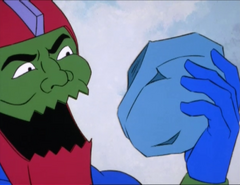 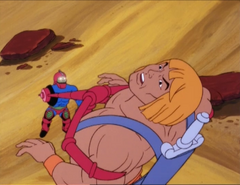 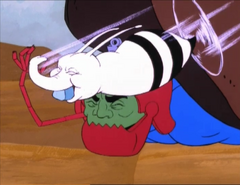 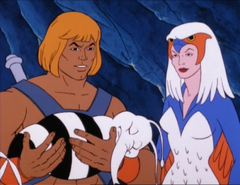