Wiki Grayskull
Register
Don't have an account?
Sign In
Advertisement
in: Characters, Females, She-Ra and the Princesses of Power characters,
and 6 more

Christine Woods
Princess Entrapta is one of the main characters in the Netflix Original series She-Ra and the Princesses of Power. She is the Princess of Dryl. Cheerful and manic, Entrapta has a love of technology and robots. She has long, prehensile twin-tails that are often shown as second limbs. Entrapta often sacrifices her social life to focus on scientific research and rather than creating relationships, and tends to study them and is bothered when her peers misunderstand her. She joined the rebellion, but during a rescue mission in the Fright Zone, is left behind after the others believe her to be dead. Thinking her friends abandoned her, she lets Catra persuade her to defect to the Horde with the promise of access to its advanced technology.

Catra's faith in her immense potential soon bears fruit with powerful technology enabling a grand scheme of conquest. Though serving the Horde, Entrapa largely considers herself a neutral party in the overall conflict and devotes herself to an abstract pursuit researching ancient technologies (First One' Tech). Furthermore, her obsession leads to trespassing into Lord Hordak's private laboratory to observe his personal research. Although Hordak is infuriated at this intrusion, her impulsive suggestions to his research prove unexpectedly productive and he soon welcomes her as a colleague in his research on portal and energy technology. When Entrapta learns that the portal experiment will destroy Etheria she wants to stop the test, but is betrayed by Catra and sent to Beast Island. Before the portal opening, Hordak questions Catra of Entrapta's location, to which Catra falsely states that Entrapta is conspiring against the Horde

Entrapta is a princess that belonged to the rebellion, but became the Horde's technician after thinking that the princesses abandoned her in a mission and realizing how advanced the Horde's tech is. Unlike most princesses, she does not need a gemstone for her abilities. Prior to joining the Rebellion, she lived only with three servants in her winding castle and replaced the rest with robots. She appears to be close friends with Catra, despite Catra constantly trying to harm her friends in the Rebellion. Entrapta is a skilled inventor, and is credited with designing advanced equipment for The Horde. An example is the Trapper Tank, which will drive and shoot by itself but is also filled with a bomb. Her specialties are computer hacking, and using her prehensile hair.

Entrapta is a short girl with purple hair and magenta eyes. She wears a white grease-stained shirt with dark purple sleeves, and the shoulders and a window at the front are cut out. She also wears a pair of dark purple overalls with the top half hanging around her waist. She has two long ponytails of curled hair that reach the ground and seem to change length at times. She also wears pink gloves and a welder’s mask with glowing red eyes. During her time on Beast Island she has gotten a more dirty look over her clothes and hair and had lost her mask and replaced it with a bug's face with glowing bright blue eyes with a small crack on the right one and a tiny bug mouth that looks like an ant's pincers.

Princess Entrapta is a technological genius and inventor who controls a host of robots, even being able to make a advanced Horde Bot named EKS. She also has prehensile hair that can change lengths and are strong enough to casually lift herself off the ground. She is extremely smart and has the abilities and knowledge to throw the entirety of Etheria off balance given the right materials. Entrapta is also able to decipher First Ones’ technology and reprogram any robot she comes into contact with. An example of reprograming is when she and the other princesses infiltrated the Horde and Entrapta reprogrammed a Horde Bot making it friendly and was named Emily.

Entrapta wears a welder’s mask and has a recording device, which she frequently logs in. She also has a variety of tools. Since her time on Beast Island, she has lost her welder's mask and replaced with a bug's face. 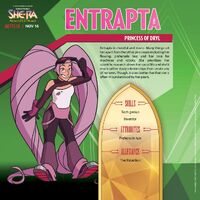 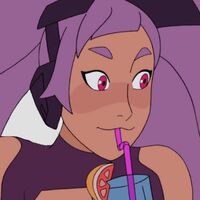 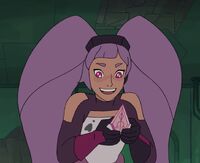 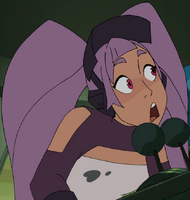 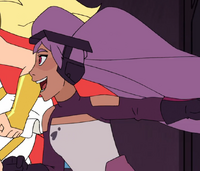 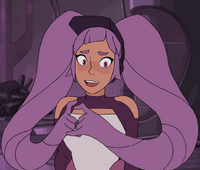 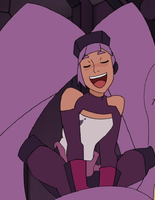 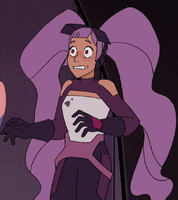 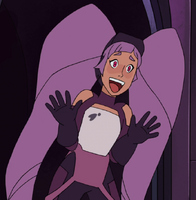 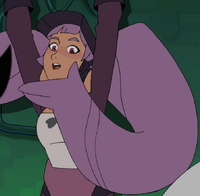