Wiki Grayskull
Register
Don't have an account?
Sign In
Advertisement
in: Characters, The New Adventures of He-Man characters, Galactic Guardians,
and 3 more

Scott McNeil
Flipshot, (aka Icarius) is an action figure from the Mattel He-Man toyline and a character from the 1990 animated series The New Adventures of He-Man.

Daring Space Ace Pilot from the cloud city, Levitan, on planet Primus. He is equipped and ready to "flip" into battle at a moment's notice. He leaves the Tri-Sloar System with Captain Hydron and travels back in time to search the universe for He-Man.

Mission: To aid He-Man and Captain Hydron in their fight to save the universe and to lead the air defense against Skeletor and the evil goons from planet Denebria.

Flipshot first appears in the minicomic The New Adventure, where he and Captain Hydron go to Eternia searching for He-Man, but Skeletor tricks them into thinking he is the force of good they are searching for, and makes them siphon the power of Castle Grayskull into their ship, but Prince Adam arrives on the ship, becomes He-Man and reveals the truth to the Galactic Guardians.

In the following minicomics, Battle for the Crystal and The Revenge of Skeletor!, he uses the Bolajet against whoever is driving the Terrorclaw (Slush Head and Optikk in the former, Flogg in the latter).

Flipshot is a regular in the animated series. His catchphrase comes when getting ready for battle, as he's asked "Are you ready?" (mostly by Hydron) and he always answers "I was born ready!". Most of the time, his arrogance gets him in trouble. 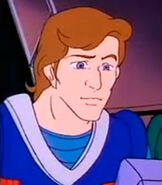 Flipshot frequently appears without his helmet in the animated series.

Animated Flipshot with his helmet on.