Fraidy Cat is the 84th episode of He-Man and the Masters of the Universe, written by Phil Harnage and directed by Ed Friedman. Cringer feels responsible when the Evil Warriors kidnap Queen Marlena, and must overcome his fears to rescue her.

This episode is the first appearance of Screeech in the series.

At Snake Mountain, Skeletor briefs his henchmen on a new plan to kidnap Queen Marlena and misdirect He-Man into a trap. While Whiplash, Mer-Man, Clawful, and Kobra Khan infiltrate the palace, King Randor and his court have lunch in the banquet hall. Randor sends Cringer to fetch Marlena from her nap, but he falls asleep waiting for her to awaken. Just then, Kobra Khan ambushes the banquet hall with his sleep gas. In the queen's bedchamber, Cringer hears someone approaching and hides under Marlena's bed, allowing the villains to capture the queen and escape.

While Kobra Khan and Mer-Man take the queen to Snake Mountain by way of the Haunted Forest, Whiplash and Clawful go to work creating a false trail for He-Man to follow when he comes after them. By the time Orko and Prince Adam awaken, they can find no sign of the queen or Cringer, so Adam transforms into He-Man. Along with Teela and Man-At-Arms, he takes the Dragon Walker to follow the wrong trail. When Cringer finally wakes up and realizes what has happened, he blames himself. Later, as Orko, Randor, and Cringer stand outside the palace considering the kidnapping, Cringer's keen sense of smell allows him to realize He-Man and the others have gone the wrong way. Orko volunteers himself and Cringer to enter the Haunted Forest and find the queen.

While Kobra Khan takes the queen to Snake Mountain, Mer-Man goes to cut down a footbridge to prevent anyone from following them. Cringer is caught on the bridge just as it begins to collapse, and falls into the river just ahead of a waterfall. When Orko tries to rescue him, they both go over the falls. Meanwhile, Marlena is brought before Skeletor, who gloats that his bionic falcon Screeech will capture He-Man.

At the bottom of the waterfall, Cringer and Orko are chased by Mer-Man's sea creatures into a tunnel to Snake Mountain. Cringer is terrified, but Orko reassures him and they resolve to continue searching for the queen. When they find her cell, Orko uses his magic to free Marlena, and she begins planning to warn He-Man about Skeletor's trap. Orko insists the queen must be taken back to the palace, so Cringer volunteers to stay behind and help He-Man deal with Screeech. Orko lifts Cringer's spirits with a magic charm for bravery and courage, which he promises will make Cringer as brave as He-Man.

By the time the Dragon Walker catches up to Whiplash and Clawful, they've doubled back to Snake Mountain. He-Man realizes that Skeletor is up to something and wants to know why the villains want him to go inside their lair. Meanwhile, Cringer makes his way to the top of Snake Mountain and is confronted by a ghost that threatens him, but the tiger's faith in Orko's charm causes it to disappear.

Just as Cringer reaches Screeech's chamber, Skeletor issues orders to attack He-Man immediately, and carry him to the Lake of Oblivion. Hoping the charm will help him, Cringer leaps on Screeech's back as it takes flight. He successfully foils the bird's ambush and gives the heroes a chance to get inside. Skeletor tries to manually pilot Screeech for another attack, but Cringer's interference causes it to crash inside Snake Mountain. Just then He-Man and the others arrive and quickly defeat the Evil Warriors. Cringer explains that Orko has seen Marlena back to the palace, and the heroes head home to join her.

Later, in the throneroom, King Randor summons Cringer to award him a medal for his bravery. Cringer claims he doesn't deserve it, as he wouldn't have been able to help without Orko's charm. When Orko admits the charm didn't really have any magic, Cringer is stunned to realize he did it all on his own. However, when a butterfly lands on his nose, he proves he is the same old Cringer.

He-Man: "Courage and fear are two important instincts."
Orko: "And we sould pay attention to both."
He-Man: "Sometimes being afraid is just as important as being brave.
Cringer: "I guess I was a double fraidy cat."
He-Man: "How's that, Cringer?
Cringer: "Because I was afraid of being afraid."
Orko: "I see... well, how do you feel now?"
Cringer: "Oh, much better. Now I'm just afraid of being brave..."
He-Man: "Sometimes you just can't win. See you all next time!"

As featured in BCI's He-Man and the Masters of the Universe: Season Two, Vol. 1 DVD boxset (Disc 3) 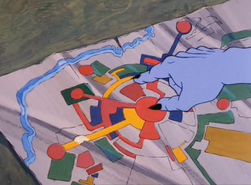 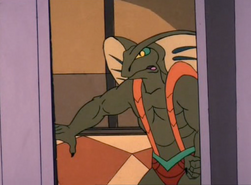 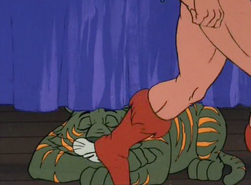 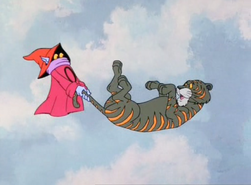 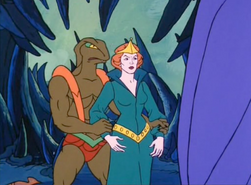 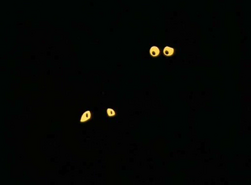 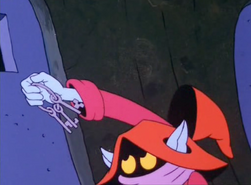 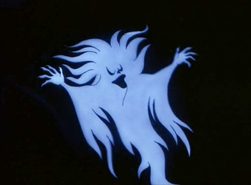 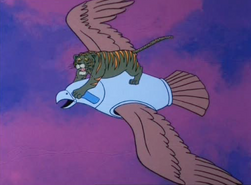 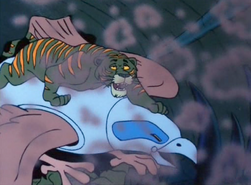 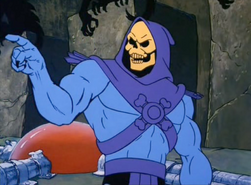 Retrieved from "https://he-man.fandom.com/wiki/Fraidy_Cat?oldid=34611"
Community content is available under CC-BY-SA unless otherwise noted.