Princess Frosta is one of the main characters in the Netflix Original series She-Ra and the Princesses of Power. She is the Princess of the Kingdom of Snows and at only eleven years old is the youngest Princess in the Princess Alliance. Frosta's kingdom is one of the most powerful, and her ability to control ice and snow makes her a vital member of the Rebellion. She is a stickler for rules and is particular about how things are done her way, but in season 2 she has seemed to lighten up and act like a kid her age should.

In her first appearance she is shown as polite, calm, serious and a stickler for rules, but after joining the rebellion she acts more carefree and energetic, likely being that her previous behavior was because she had to act that way to fulfill her role as the ruler of her kingdom.

Little is know about Frosta's background. What we do know however, is that she is the youngest of the princesses. She took the throne at eight years old and claims that it's hard to make friends when people are your sworn subjects.

Princess Frosta can control ice and snow and build structures out of ice. She is highly skilled in this and is a formidable opponent despite her young age.

She is in possession of the Fractal Flake Runestone. With her connection to the Runestone she is able to fix her castle if it becomes broken, or can cover her kingdom in ice walls to protect her kingdom.

She is also in possession of a white staff with a blue crystal at the top of it.

Ice Powers: With her power to conjure ice, she is able to freeze the ground, conjure ice spikes from the ground, freeze water, and can make multiple constructs of ice.

Glimmer: In season 2 she was over excited to make friends with the other princess', particularly Glimmer. As seen in "The Frozen Forest" she really wants to be friends with Glimmer attempting multiple times to be really helpful like pointing out the Horde Robots' weakness and suggesting codenames to Glimmer. She later upsets Glimmer to the point of Glimmer snapping and telling Frosta to stop getting in the way which makes Frosta run off. A moment later Glimmer talks and sympathies with Frosta, telling her she reminds her of herself. They make up, acting as if nothing happened and are back on good terms. Their relationship has grown in the sense that in "Roll With It" when Frosta sits next to Glimmer and Glimmer isn't annoyed by it. It's also important to mention that Frosta seems to look up to Glimmer in a sort of mentor student way.

Mermista: They have a decent relationship and because of the compatibility of their powers they generally fight together. Two examples is when in "The Frozen Forest" Mermista covered one of the EKS's with water and then Frosta freezes it in place, and when in "Roll With It" Frosta's ice claw brakes and Mermista gives her a new one. 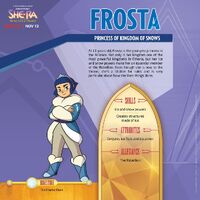 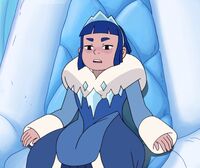 Frosta acts polite after being insulted

Laughing at a pun 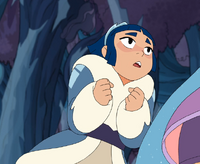 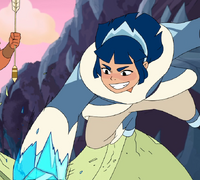 She comes from nowhere 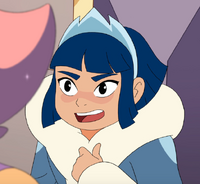 Retrieved from "https://he-man.fandom.com/wiki/Frosta_(She-Ra_and_the_Princesses_of_Power)?oldid=34021"
Community content is available under CC-BY-SA unless otherwise noted.