Karen Fukuhara
Princess Glimmer of Bright Moon is one of the main characters in the Netflix Original series She-Ra and the Princesses of Power. She is inherited her magical powers from her mother, Queen Angella. Sweet, enthusiastic and driven, Glimmer truly believes that she can achieve anything if she has her friends by her side. Always looking to forge her own path in life, Glimmer is motivated by love, loyalty, friendship and fairness.

Unlike her original counterpart, who was a She-Ra supporter that often had to be rescued, Glimmer is now a frontline fighter who has saved She-Ra as much as She-Ra has saved her.

Glimmer appears as a young girl in her late teens. She has pinkish-purple hair cut in a short bob and has purple eyes. She wears a blue cape and has two small wing tattoos on her back. She wears purple and blue boots with the Bright Moon crest and a dark purple sleeveless romper-like piece of clothing with a matching sleeveless cape the same color as her eyes. She also wears a pair of fingerless blue and white gloves and has an aura of sparkles around her at all times.

Glimmer has magical powers that she inherited from Queen Angella, her mother. Her powers include the ability to teleport, create sparkles, and generate blasts of blinding energy. She must recharge her powers after an unknown period of time by laying under the Moonstone Runestone. She has difficulty teleporting more than two people and will pass out if she overuses her magic. Her magic seems to increase when she is experiencing strong emotions like fear and anger. 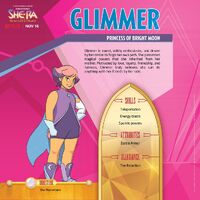 Glimmer and friends in the scary place

Add a photo to this gallery
Retrieved from "https://he-man.fandom.com/wiki/Glimmer_(She-Ra_and_the_Princesses_of_Power)?oldid=34020"
Community content is available under CC-BY-SA unless otherwise noted.