Grr is a character in the animated series The New Adventures of He-Man.

A savage Mutant mutt, Grr was named because of the growling noise he so often makes.

In "Sword & Staff," the Mutants gave Grr to Skeletor as a present, believing Skeletor would never be able to tame the wild creature. However, Skeletor soon proved them wrong by sending Grr cowering with just a glance. Skeletor was thrilled that Grr was as mean as he was, and kept him.

Grr was a vicious little creature who could track anyone. He was not afraid to face off against He-Man even without his master present, and once briefly fought with He-Man's own pet bird, Clobber, at some point of "He-Man Mutant." Grr was also able to breathe in the vacuum of space, as shown in "The Nemesis Within."

Skeletor often showed Grr more respect than he did the Mutants themselves, actually developing a liking for his new pet. Despite his evil nature, Grr was susceptible to Drissi's telepathic powers, and she was once able to turn him against Skeletor. 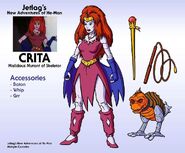 Retrieved from "https://he-man.fandom.com/wiki/Grr?oldid=36127"
Community content is available under CC-BY-SA unless otherwise noted.