Skeletor
The Havoc Staff is a magical weapon wielded by Skeletor.

The staff is mostly used by Skeletor to channel his magic. However, it has also been employed for remote viewing and as a melee weapon in battle against He-Man's Power Sword.

It is typically depicted as a long sceptre crowned with a ram's skull - sometimes with an embedded crystal ball. The staff typically has a ball on the bottom end. There is usually a widened area below the skull.

The size of the skull and staff vary greatly, but the full staff is usually close to Skeletor's height.

The skull itself varies from being made of real bone, to the shape simply being carved onto the staff.

In the comics and 2002 cartoon, the ram's horns are golden colored while the rest of the skull is either white or pale yellow.

In the live action version of the film, the entire thing was metal, and the skull area had decorative rays and hooks on it.

In the 1980's cartoon, the skull was more tightly condensed, with the horns closer to the head.

With the exception of the live-action film, the staff is always a deep purple to match Skeletor's outfit. 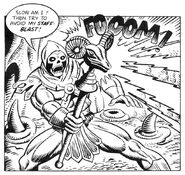 Live-Action staff with action figure
Add a photo to this gallery
Retrieved from "https://he-man.fandom.com/wiki/Havoc_Staff?oldid=19233"
Community content is available under CC-BY-SA unless otherwise noted.