This article is about He-Man's son. For He-Man's ancestor, see He-Ro.

He-Ro is the titular character in the unproduced animated series He-Ro Son of He-Man and the Masters of the Universe. The character was developed for two separate series - one in 1988 in which a series bible was created for the 'He-Ro: Son of He-Man' show. This version of the show was an early version of the 'New Adventures of He-Man' story. Here, however, He-Ro is the son of He-Man and Teela who is sent into space in a rocket when Eternia faces a dire threat. He lands on the planet Primus and is raised by Darius.

Skeleteen, the son of Skeletor and Shadow Weaver, is the main antagonist for He-Ro in this series. This series bible is currently in the possession of Mattel.

The other, more well known version of the character, came from a 1996 as part of a pitch by Lou Scheimer to DIC Entertainment to make a sequel to the original He-Man and the Masters of the Universe. The pitch was not used and the series never moved beyond the original show bible.

According to Scheimer's pitch, He-Ro is the alter ego of Dare, a feral child discovered by He-Man ten years after Prince Adam became king of Eternia. Dare is adopted by Adam and inherits the Sword of Power. He assumes He-Man's responsibilities by transforming himself into He-Ro and his faithful crow Craven into Battle-Bird. Cringer continues to serve as Battle Cat in He-Ro's adventures.

Masters of the Universe Classics

During a Q&A, Mattel implied Battleground Evil-Lyn's bio included some elements of Dare's story. Since the bio mentions an unrevealed son of Skeletor, and Dare's biological parents' identity was going to be an ongoing mystery throughout the cancelled series, it's was though that Dare might be Skeletor's son. However, on August 20, 2011 Mattel confirmed that the son of Skeletor and Evil-Lyn was not in fact Dare.

Normally we don't spoil bio info, but for the sake of sanity and clarification, no Dare is not Skeletor and Evil Lyn's son. Two different characters. Keep reading the bios! - ToyGuru

According to Dare/He-Ro II's toyline bio, when He-Man returned to Eternia following the apparent defeat of Skeletor, he at long last wed his childhood friend and sweetheart Teela. Together they ruled over a peaceful Eternia, free at last from the factions that had fought over it for so long. But in his distant dimensional prison, the Unnamed One re-amassed power. With the help of Evil-Lyn’s son, he was released and struck out against guardians of the Sword of He. Dare, the teenage son of Adam and Teela, took his rightful place and claimed his father’s sword, becoming the new He-Ro, named for the legendary Wizard Warrior of Preternia. Using the Sword of Power, He-Ro fought the Unnamed One, eventually slaying him with the very power he once sought to control.

Dare's adventures were further fleshed out in MOTU Classics minicomics 6, 7 and 8. In these comics, Dare was sent back in time where he trained with his legendary namesake He-Ro and He-Ro's mentor, Eldor. 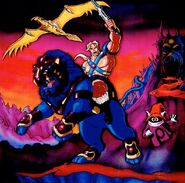 Add a photo to this gallery
Retrieved from "https://he-man.fandom.com/wiki/He-Ro,_Son_of_He-Man?oldid=32197"
Community content is available under CC-BY-SA unless otherwise noted.