Hordak is one of the three secondary antagonists (alongside Catra and Shadow Weaver) of the Netflix original series She-Ra and the Princesses of Power.

He is the domineering and imposing leader of the The Horde and is bent on world domination. Hordak is powerful and possesses a brilliant and technological mind with a streak of pragmatism underlying his competence as a commander.

Hordak is one of the many clones of Horde Prime. For a time, he was his creator's favorite but, due to gene defect causing his body to slowly decay, he was sent to die on the front line. Instead, he found himself on Etheria with only his crashed ship for resources. With that, Hordak eventually made himself a formidable power base for The Horde with plans to conquer all of Etheria and one day earn back his place at Prime's right hand.

As for his personal operations, Hordak largely kept himself as supreme commander with a pragmatic manner of administration that manages to secure the loyalty of his minions. As such, he largely delegated discipline to his minions like Shadow Weaver, and made a point of prioritizing the Horde's objectives while being a relatively benevolent ruler to his minions as long as they proved obedient, productive and truthful to him.

Personally, Hordak pursued personal technological research projects, which drew the interest of a recent defector to the Horde, the eccentric genius engineer, Princess Entrapta. Although initially infuriated at her intrusion, Entrapta's astute suggestions soon impress Hordak and they become close research colleagues. This relationship deepens into a friendship with Entrapta taking it upon herself to create a medically beneficial exoskeleton for him to improve his health. For his part, Hordak was perhaps grateful for the first time to have such a companion of such generosity, But he was devastated when Catra deceived him into believing that she betrayed him by letting the other princess in the Fright Zone. While his portal experiment seemed to fail it did succeed in transmitting a signal to Horde Prime.

In the subsequent offensives, Hordak takes an increasingly active role in field operations while delegating more command duties to Catra. However, when the shape-shifting mercenary, Double Trouble, reveals what Catra did to Entrapta and deceived him about, Hordak attacks Catra in a rage.

Eventually, Horde Prime comes to Etheria and is displeased at what Hordak was attempting to gain power for himself. As a result, Hordak is subdued and taken for "reconditioning."

Hordak has a brilliant technological mind.

Furthermore, his manner of ruling is quite pragmatic in nature. For instance, upon hearing of Force Captain Adora's desertion, he simply promoted Catra to that rank as a replacement and forbade his Second-in-Command, Shadow Weaver, from deviating from the Horde's current military objectives to recapture the defector. Furthermore, when he secretly learned of Catra and Entrapa's research project, Hordak let them know that he approved of it and authorized them to requisition any materials necessary to advance the project.

Hordak wears First Ones tech-powered armor which gives him super-strength. 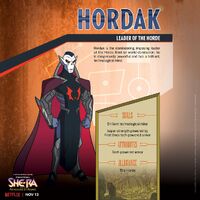