Horde Troopers are foot soldiers of the Horde Empire. Although each trooper is individually unremarkable, in large numbers they are used to great effect in the occupation of Etheria by Hordak. Vast armies of Horde Troopers were also used during the Horde's failed invasion of Eternia.

It is unclear whether Horde Troopers are humanoids wearing bulky armor, or robots. In their appearances in most media, the troopers are explicitly robots, so as to demonstrate the toy's "self-destruct" feature. However, some episodes of She-Ra: Princess of Power have depicted them with names and feelings, treating them as bullies who enjoy tormenting innocents and fear Hordak's disapproval; this behavior may be considered as unusual for machines, but actually, partially-emotional robots exists in the He-Man universe. Writers for the series presumably used whichever form was most convenient; expendable machines could be defeated more dramatically, whereas living people or high-level artificial intellect could be given more natural dialogue.

The Horde Troopers first appear in the She-Ra TV series.

A couple of variations appear, such as:

In the minicomic "The Hordes of Hordak", Hordak launches a mass-attack of Horde Troopers, but He-Man and Sy-Klone discover the Horde Troopers' weakness: they can not take a punch to the chest. In the Star Comics, the Horde Troopers are not robots, but armors magically-animated by Hordak.

The Horde Troopers briefly appear in the 2002 series, in the episode "The Power of Grayskull", with a different appearance. This version of the show differs from the previous style as the Horde is an ancient army that fought against King Grayskull for dominance of Eternia. These Hordesmen seem more like humans wearing medieval forms of armor and carrying swords. Though there is no confirmation on whether they were machines or intelligent beings within the armor itself as the only appearance are the Troopers being commanded to fight.

The Horde Trooper figure has a button on its Horde insignia that makes it "self-destruct" when pressed. Lots of play value with this because you could imagine him being shot or exploding. They come with a small staff, and you may also notice on some of them, their heads are pushed in a little. Most of them shared this feature and it is rare to have one with the entire helmet visible. During the cartoon they commonly do have higher placed helmets. With the toys it mainly has to do with protection to the barely attached head. 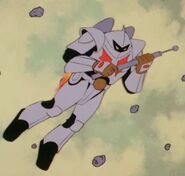 Add a photo to this gallery
Retrieved from "https://he-man.fandom.com/wiki/Horde_Trooper?oldid=19345"
Community content is available under CC-BY-SA unless otherwise noted.