Wiki Grayskull
Register
Don't have an account?
Sign In
Advertisement
in: Characters, The New Adventures of He-Man characters, Galactic Guardians,
and 3 more

Don Brown
Hydron is an action figure from the Mattel He-Man toy line and a character from the 1990 animated series The New Adventures of He-Man.

Hydron is the leader of the Galactic Guardians from the planet Primus. Hydron first appears in the minicomic "The New Adventure", where he and Flipshot go to Eternia searching for He-Man, but Skeletor tricks them into thinking he is He-Man, and makes them siphon the power of Castle Grayskull into their ship, but Prince Adam arrives into the ship, becomes He-Man and reveals the truth to the Galactic Guardians.

According to the episode "The Siege of Serus", Hydron is the only member of his family who left the underwater city of Serus to join the service. This episode also reveals he has a sister named Aquata. 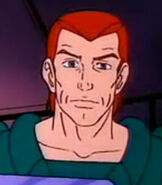