He is a member of the Evil Warriors, an Eternian martial artist with a powerful, enlarged golden right hand which he uses to perform strong karate chops. He is also a master swordsman, and is often considered to be the rival of Heroic Warrior Fisto, although no official media has ever developed this.

Jitsu was introduced into the Masters of the Universe toy line as part of the third series of figures in 1984. However, he made his debut on the cartoon a year earlier, in one of the show's earliest episodes, "The Dragon Invasion". An early intention of the cartoon was to promote upcoming figures, and Jitsu is a prime example of this. The figure was still in the development stage at the time of this episode, therefore his appearance is slightly different: his right hand seemingly being made of flesh rather than gold; although it should be noted that even with released figures, the Filmation versions sometimes differed slightly in appearance. The character's name in the series bible is Chopper,[1] although he is never called this (or any other name) on-screen. His role in this episode is a mere background appearance, accompanying Skeletor and his minions in an invasion of Castle Grayskull. Not only is his name never mentioned, but he only has one line and aside from a brief display of his karate-chopping abilities, is given no development whatsoever. He is never featured in the series again, even after his figure finally hit the market, due to the producers' fears that he would be perceived as a racial stereotype.[2]

When his figure was released he was promoted as the "Evil Master of Martial Arts" and was widely seen as a rival to the heroic character Fisto, released in the same wave, based upon the similarity of their designs; both had spring-loaded right arms. However, although the mini-comic "The Clash of Arms", packaged with both their figures, hints loosely at some kind of rivalry between them, no media ever produces any official backstory between the two characters. Many comics and storybooks ignore the idea of any connection between them altogether, leaving fans to only guess at what the connection between the two characters may be.

Aside from a couple of figures released later in the toyline, Jitsu is one of the least-featured characters of the entire franchise. Even most storybooks and comics give the character only minor roles at most, such as in his two other minicomic outings (Hordak: The Ruthless Leader's Revenge! and Mantenna and the Menace of the Evil Horde!) and he is never given an official origin or any real character development. It is possible that this character's underexposure may relate to the fears of racial stereotyping that led him to be mostly excluded from the cartoon.

The closest that Jitsu gets at an origin is the story "Der Geheimnisvolle Karatemeister" (The Mysterious Martial Artist) from the German MOTU magazine published by Interpart. In the story, Jitsu is a karate master from the East empire of Eternia, who wanders Eternia searching worthy rivals. Skeletor convinces him to fight He-Man and, when He-Man faces Jitsu in fron of Grayskull, Jitsu shows his strength by breaking a rock with his hand and a tree with his head. He-Man then proceeds to tear the ground where Jitsu is standing and lift it, so the martial artist decides to search for rivals anywhere else, despite Skeletor telling him to come back.

When the MotU franchise was relaunched in 2002 with a new toy line and cartoon series, Jitsu was ignored altogether, the only character from his original series not to be brought back for a new incarnation.

Jitsu was included in Series 6 of NECA's Masters of the Universe mini-statue line. He also came with a pack-in figurine of Odiphus, which had originally been planned for release in 2005. The line is a continuation of the discontinued 2002 Mattel Masters of the Universe action figures also designed by Four Horsemen Studios, and is sculpted in a similar size and style. Series 6, the finale of the line, was released in 2007.

Promotional material by Mattel throughout the 1980s often depicts Jitsu riding atop the evil horse Night Stalker, once again drawing a parallel with Fisto, who is usually seen atop the horse's heroic counterpart Stridor. Widely released boxed sets of both Jitsu and Night Stalker, and Fisto and Stridor, reinforce this connection.

Masters of the Universe Classics

The bandit Jitsu was rescued from the Prison Starr by Keldor during the Great Unrest. In gratitude, Jitsu offered his services to Keldor and remained loyal after his transformation to Skeletor.

Jitsu was a master in several forms of martial arts and often found himself at the frontline in the war against the heroic warriors of King Randor. During the Battle of Gretori Bridge Jitsu was wounded by his archenemy Fisto. His hand had to be replaced by a golden bionic hand, constructed by Tri-Klops.

After Skeletor left Eternia for the conquest of the stars, Jitsu took over Snake Mountain and ruled over it with a golden, iron fist. 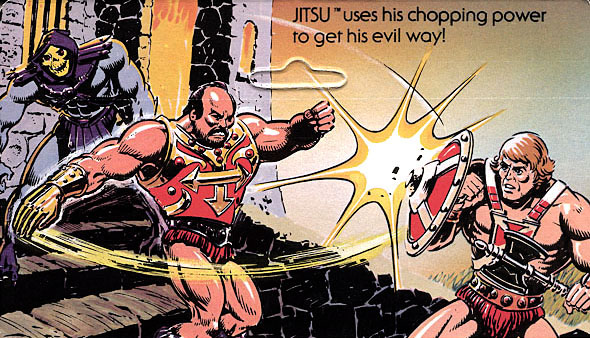