This article is about the Masters of the Universe: Revelation character. You may be looking for the original character.

This section of the article contains spoilers that would otherwise ruin the plot/storyline. Read at your own risk!

King Randor as he appears in Masters of the Universe: Revelation.

When Adam was still a boy, King Randor instructed his son in the proper way to handle a sword. Later, when Adam had grown older, while waiting for his son to pick out a crown to wear at a party, Randor confided in him that Eternia needed to have seperate heroes and rulers, unlike in the days of his forefather King Grayskull.

Years later, in a time when Skeletor had not been heard off for a long time, and was assumed dead, King Randor was growing anxious and found it hard to get to sleep. Although his wife, Queen Marlena attemted to comfort him, Randor remained heavy of heart. That night, he was seemingly attacked by the mythical Orlax of Primeria in his own palace of Eternos, and fell into a deep sleep after being touched by one of the creature's tentacles. He was brought to Castle Grayskull, where it was hoped that the Sorceress could discover a cure.[1]

Some time later, Randor and Marlena were preciding over a grand ceremony that would conclude with Teela being given the title of Man-At-Arms. Before the ceremony could be completed however, Teela, her father and the entire guard were called away to defend Castle Grayskull from an attack by the forces of Skeletor. Randor ordered his son, Prince Adam to secure the door while he and Marlena showed all of their guests the way to safety.

After the battle, Teela and Duncan returned with grave news: in order to defeat Skeletor, Eternia's champion He-Man gave up his own life. Marlena knew that this meant that her son was dead, but Randor was still unaware of Adam's secret identity as He-Man. Upon learning the truth, Randor felt betrayed by Duncan, his former Man-At-Arms, stripped him of his title and banished him from Eternos on the spot. Teela, who felt equally betrayed and lied to by everyone she held dear, also decided to leave the Royal Palace.[2]

After these events, Randor decreed Castle Grayskull to be a forbidden zone.[3] 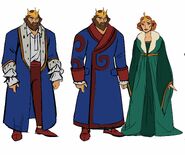