Wiki Grayskull
Register
Don't have an account?
Sign In
Advertisement
in: Animated series, Masters of the Universe: Revelation

A radical return to Eternia, REVELATION is a direct sequel series to the classic era of MASTERS OF THE UNIVERSE. Featuring fan favorites He-Man, Orko, Cringer, and Man-At-Arms, the story pits our heroic warriors and guardians of Castle Grayskull against Skeletor, Evil-Lyn, Beast Man and the vile legions of Snake Mountain!
But after a ferocious final battle forever fractures Eternia, it's up to Teela to solve the mystery of the missing Sword of Power in a race against time to prevent the end of the Universe! Her journey will uncover the secrets of Grayskull at last. This is the epic He-Man and the Masters of the Universe saga fans have waited 35 years to see!

After a calamitous battle fractures Eternia, Teela and an unlikely alliance must prevent the end of the Universe in this sequel to the ’80s classic.

He-Man and Skeletor face off like you've never seen them before in a new series that picks up where Masters of the Universe: Revelation left off.[3]

In August 2019, Kevin Smith announced that the 2019 Power Con that he and Netflix are developing a new series titled Masters of the Universe Revelation that will be a direct sequel to He-Man and the Masters of the Universe that follows Teela searching for the missing Power Sword.[2] In August 2020, Kevin Smith that he "just watched the first fully animated pass" of the series, and he indicated that the series would be released in 2021.[1]

On February 14, 2020, the full voice cast for the series was officially confirmed, with Chris Wood to portray Prince Adam / He-Man and Mark Hamill portraying Skeletor.[5]

Around the same time as the show's announcement, it was revealed that Powerhouse Animation Studios would be providing their services to the series, taking inspiration from anime.[6]

On February 8, 2021, it was revealed that Bear McCreary would be composing the score to the series.[7]

In April 2021, it was announced that Dark Horse Comics would be publishing a four issue comic book series that would serve as a prequel to the Netflix series. [8] 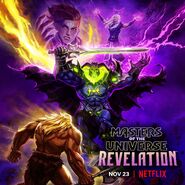