Vella Lovell
Princess Mermista is one of the main characters in the Netflix Original series She-Ra and the Princesses of Power. She is the Princess of Salineas with the ability to control water. Mermista is the "cool girl" and her attitude usually appears to be blunt and unimpressed. She does not mince words when she speaks, but Mermista does have a soft side even if it is hard for her to express her true feelings.

Currently, we know her father retired and because of that she now rules over Salineas, and her guard is also her butler. She has a complicated relationship with Sea Hawk.

Princess Mermista can control water and transform her legs into a mermaid's fin. She can also breathe underwater.

Mermista is armed with the royal trident and carries The Pearl runestone. 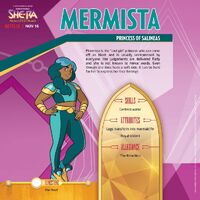 Mermista transforming into her mermaid form 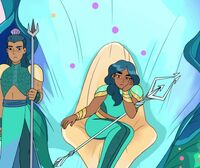 Mermista on her throne in Salineas 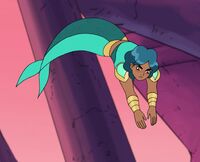 Mermista at the Princess Prom

Add a photo to this gallery
Retrieved from "https://he-man.fandom.com/wiki/Mermista_(She-Ra_and_the_Princesses_of_Power)?oldid=34029"
Community content is available under CC-BY-SA unless otherwise noted.