Origin of the Sorceress

Origin of the Sorceress

Origin of the Sorceress is the 73rd episode of He-Man and the Masters of the Universe, written by J. Michael Straczynski and directed by Marsh Lamore. The Sorceress tells He-Man the story of how she assumed her station as the guardian of Castle Grayskull, while they await a battle with the evil wizard Morgoth. This episode features the first and only appearance of Stridor in the series.

This episode is notable in that it sets up elements (notably, the Sword of Protection and the Evil Horde) that would feature heavily in She-Ra: Princess of Power.

Prince Adam and Cringer are relaxing in the Royal Palace, but Orko cannot relax wondering what Man-At-Arms has been working on in his lab. Just then Man-At-Arms reveals himself and his newest invention, the robotic horse Stridor. Without warning, Stridor whinnies loudly, as it is programmed to do whenever it senses danger. A wheel of fire appears above the palace, shooting meteors at the palace grounds. Adam and Cringer transform into He-Man and Battle Cat and join the others in deflecting the onslaught and dispelling the fiery ring. He-Man and Man-At-Arms are bewildered by the attack until the Sorceress telepathically summons He-Man to Castle Grayskull for answers. She insists that he come alone, so He-Man to take Stridor with him.

At Grayskull, the Sorceress explains that she recognizes the wheel of fire as the work of Morgoth the Terrible, who had been a sorcerer long ago. Morgoth sought more power than any mortal should, to conquer both Eternia and the entire universe. In his quest for power Morgoth became immortal, and was transformed into a giant. According to the Sorceress, the ancients had cast him into an inescapable prison dimension. Now that he has found a way to escape, the Sorceress and He-Man must make a stand at Dark Mountain. To retain her human form and full powers during the journey, the Sorceress employs the Crystal of Allenar.

In the ruins at Dark Mountain, He-Man and the Sorceress keep watch through the night, although the Sorceress is confident that Morgoth is set in his ways and will not make his move until dawn. She refers to her last encounter with Morgoth, causing He-Man to notice that there was a time when she was new to her role and her powers. Using her magic, the Sorceress shows him how she appeared when she was merely Teela Na, who lived in the village of Noella.

As the Sorceress explains, Noella was a quiet, peaceful community until Morgoth secretly escaped his prison, and caught the attention of a small alien fleet serving as a scouting party for a vast interstellar army bent on conquest. This advance force aided Morgoth in capturing Noella, but disagreed with him about whether to summon reinforcements. Although hope appeared to be lost, an old man suggested that their last chance was to find "the castle." Curious, Teela Na pressed him for more information, and he explained that there is a prophecy that when the evil times come and a fighter for good is needed, the castle of Grayskull will open its jawbridge.

With little more than the old man's vague recollections, Teela Na escaped out into the wastelands to find Castle Grayskull. After wandering all night and at the verge of exhaustion, she saw the castle materialize before her, and heard a voice inviting her to enter. Inside, Teela Na met Kuduk Ungol, who was the Sorceress and guardian of Castle Grayskull. The crone offered Teela Na the opportunity to take her place as the Sorceress, which would give her the power to fight off Morgoth and the invaders but also many responsibilities. The keeper of Castle Grayskull would be required to fight a constant war against evil, comfort those in need, and protect the Swords of Power. Teela Na accepted this offer, and upon receiving the power of the Sorceress she gained the ability to transform into the falcon Zoar.

When Teela Na retuned to Noella, she used her new powers to chase off the invading aliens and send their ships far away, to prevent them from reporting back to their masters until Eternia could prepare for a full-scale invasion. Rather than test her skills against Morgoth, Teela Na surprised him with a sudden attack, returning him to his prison zone before he had a chance to think of a defense. With the danger passed, Teela Na returned to Castle Grayskull to assume her new responsibilities, and found that Kuduk Ungol was gone.

As the Sorceress finishes her story, Morgoth returns in his wheel of fire to place a massive gem on ground to link himself to Eternia. He-Man struggles to overcome Morgoth's protective barrier and destroy the gem, even as Morgoth assures him that no living thing could penetrate the field. However, Stridor is an unliving machine, and easily passes through the barrier where He-Man could not. Morgoth frantically blasts Stridor with his magic, but the robotic steed succeeds in kicking Morgoth's gem into He-Man's reach. Angered by the punishment Stridor has suffered, He-Man splits the gem in two and throws the pieces back at Morgoth, banishing him once more to his prison dimension.

With Morgoth defeated, He-Man carries Stridor all the way back to the palace for repairs. Once the robot is fully functional again, Man-At-Arms analyzes its thought patterns to discover that it longs to be free to roam wild. The Sorceress concludes that Stridor is no longer merely a machine, and its experience with Morgoth has made it something more. He-Man and Man-At-Arms set Stridor free, and thank the Sorceress for her years of work in the service of good.

He-Man: "Today we learned about the importance of taking the responsibilitiy to care about our fellow man. If you have a friend who needs help, who's having a difficult time, do whatever you can to help them out. Because, as you saw in today's episode, no matter how big the problem, one person, or one living creature, can make a big difference. See you next time."

As featured in BCI's He-Man and the Masters of the Universe: Season Two, Vol. 1 DVD boxset (Disc 2) 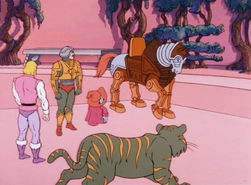 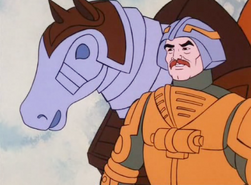 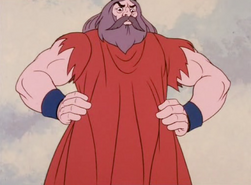 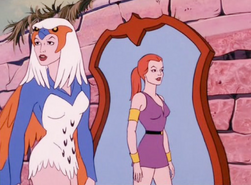 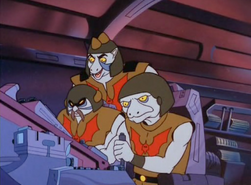 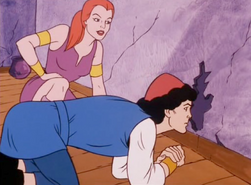 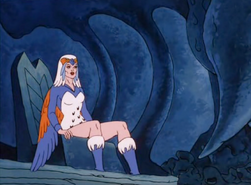 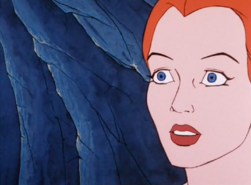 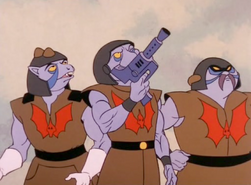 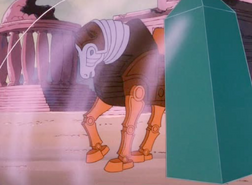 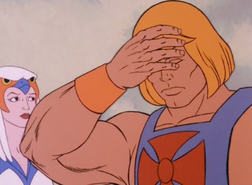 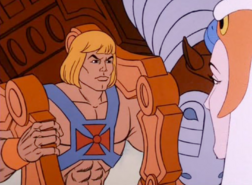