View source
watch 01:33
Wiki Targeted (Entertainment)
Do you like this video?
Play Sound

Erik Gunden
Gabe Khouth
Griffin Newman
Orko is a character from the Masters of the Universe franchise. The character was not originally developed for the 1980s toy line, but was instead created by Filmation to provide comic relief in the He-Man and the Masters of the Universe animated series. Owing to the popularity of the series and the character, Mattel later produced an Orko action figure, and he has had a major role in the franchise ever since.

The character was named Gorpo in the early original series drafts, and that name was still used in the Brazilian Portuguese dub of the original series, but he was renamed Orko for animation purposes; Filmation artists often flipped the character cels, a technique that works best when the characters are symmetrical in design, and putting a "G" on Orko's shirt would have complicated the process. 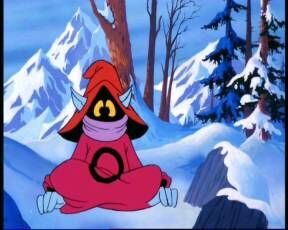 Orko is a "Trollan", a race of beings from the extradimensional world of Trolla. Like all Trollans, Orko appears to be a diminutive blue humanoid, capable of floating in mid-air, whose appearance is almost completely hidden beneath a robe, hat, and scarf. Little more than Orko's hands, ears, and eyes are ever seen by the audience, as Trollan custom only rarely permits the revelation of one's face. Orko's face was designed in production drawings but never appeared in the series; when his clothing is removed he is always obscured.

The laws of nature on Trolla are vastly different than those on Eternia, so although Orko is an accomplished wizard on his homeworld, his spells usually backfire or malfunction when he helps He-Man in adventure or provides entertainment in the Royal Palace. However, this premise is not consistently applied in the Filmation series; in some episodes Orko is equally amateurish on Trolla, and in others his uncle Montork is a powerful magician on both worlds. In the 2002 series, Orko is shown to be a slightly more competent magician, although he indicates he lost a wand when he arrived on Eternia that enhanced his abilities.

In addition to his magic spells, Orko also stores a plethora of items, some useful, some not-so-useful, inside his hat. The sheer number of things he stores inside the hat is impossibly great, suggesting that the hat itself is a bag of holding under some kind of magic spell.

Orko came to Eternia when a "cosmic storm" accidentally transported him there. He appeared in the Tar Swamp, where he found a young Prince Adam and his pet, Cringer, at the time a tiger cub, and saved them both from dying in the tar. However, he lost his pendant in the process after colliding with a tree.

Stuck on Eternia, Orko was made Royal Buffoon by the King of Eternia in gratitude for having saved his son. Orko became one of Adam's closest friends; in fact, Orko knows that Adam is secretly He-Man, although it is never revealed how he found out. However, Orko frequently annoys Man-At-Arms, due to his magic constantly backfiring or Orko coming into his lab unexpected and uninvited and messing with his equipment, which gets on Man-At-Arms' nerves rather than amusing him as it does others. Orko has proven to be a good friend and a valuable ally, despite his unpredictable powers and the fact he is more than a little clueless. Sometimes Orko wonders how useful he is to He-Man, but despite his apparent cowardliness, he never fails to help those in need.

Orko returns to Trolla, with the help of others, on a number of occasions. The first time, he helps He-Man save the life of several Trollans captured by a humanoid dragon called Dragoon, and begins a romance with a Trollan girl named Dree Elle. However, he decides that his place is now on Eternia, and so he returns there. However, he still occasionally visits his friends and relatives on Trolla.

Through his friendship with Adam/He-Man, Orko also knows that his twin sister Adora is She-Ra but didn't meet her when he ended up on Etheria by accident. Also, Orko strikes up a friendship with Madame Razz.

In the 2002 series, Orko is more or less the same, but it is revealed that he and Cringer followed Prince Adam to Castle Grayskull and watched him transform into He-Man for the first time. Orko then follows He-Man and the new Battle Cat into battle and almost reveals He-Man's identity to Teela and the other Masters, despite having been warned by both The Sorceress and He-Man not to. Fortunately, Man-At-Arms, quickly steps in and stops him, informing Teela and the other Masters that the new hero is He-Man and that the Sorceress had told him of He-Man's coming beforehand. In this series Orko was a very powerful wizard but when he came to Eternia and saved Prince Adam, he lost his wand, which was needed to control his magic (reminiscent of the loss of his amulet in the original series). A flashback episode, "The Power of Grayskull", which reveals the history of Adam's ancestor King Grayskull, going on a quest for power to defend Eternia, and Grayskull encountered an Oracle who looked and sounded much like Orko, suggesting that other Trollans might have found their way to Eternia.[1]

In MVCreations' last He-Man comic, Orko disastrously lost control of another of his magic spells. After a flashback to Trolla, where he fought monsters as "Orko the Great" while Dree Elle, Montork, and Gark looked on, he again asks the sorceress to help him return home. She directs him to the Oracle of Zalesia, and after he and He-Man get directions from the Faceless One, they find the ruins of his temple. There, the Oracle offers him a choice: the material he needs to create a doorway to Trolla, or a map that would give him a larger role in the war for Eternia. Recognizing the Oracle's writing, Orko realizes he's also a Trollan, and chooses the map. The Oracle assures him he made the right choice, and his time to return home would come. The map led Orko to his missing wand, and Adam reintroduced him to the royal court as Orko the Great.

Masters of the Universe Revelation

Orko has powerful magic abilities, but he cannot always cast his spells correctly. He is a great magician, but a muddled one, which is implied to be a result of the laws of nature and physics being so much different on Eternia than they are on Trolla (where his magic is at its strongest). His magic is so powerful that it has been able to affect the sword of He-Man, taking it away from its owner. Orko also has a magic wand that makes his magic work flawlessly.

In the comics, he was able to fight with Skeletor magically.