Present
The Power Sword is a fictional sword from the Masters of the Universe toyline. It is sometimes referred to as the Sword of Power and the Sword of Grayskull. It started out as a mystical object in the early stories, in which Skeletor tries to obtain both halves and put them together in order to gain power, while He-Man's role is to stop him by using more regular weapons such as an axe and a shield. With the arrival of the He-Man and the Masters of the Universe animated series, the Power Sword became the means by which Prince Adam transforms into He-Man.

There is no evidence of the Power Sword being originally broken or separated in this version of the story. The weapon kept the same basic shape during most of the 1980s, but then it was radically redesigned twice: for The New Adventures of He-Man as well as the 2002 remake of He-Man and the Masters of the Universe.

The Power Sword appears as early as the He-Man and the Power Sword illustrated book that was packaged with the original He-Man action figure. Skeletor's goal in the book is to acquire the other half of the sword hidden inside Castle Grayskull in order to obtain the sword's total power, adding that "the magic fires, created by ancient scientists and sorcerers, will blaze again" once the two halves are joined. The specific purpose of the quest is also made clear: the Power Sword can be used to open a hole in the dimensional wall in order to bring reinforcements from Skeletor's dimension of origin, which would allow Skeletor to conquer Eternia's dimension. Once the two halves of the Power Sword are joined, Skeletor is able to use the sword to command various objects to attack He-Man. However, the spell is broken once the Sorceress splits the Power Sword into two halves again, hiding them and making the Power Sword the only key that can open the castle's Jaw-Bridge when inserted into an enchanted lock.

The next illustrated book, King of Castle Grayskull, reveals where the two halves have been hidden: one at Eternia's "highest point", the other beneath its "hardest rock." Whoever finds them can claim the throne of Castle Grayskull and the "secrets of the universe". The "highest point" turns out to be the top of Stratos's mountain, while the "hardest rock" is the rock where He-Man built his home in the previous book. As expected, the Jaw-Bridge opens once the two halves have been inserted into the lock, but then Skeletor loses the sword again in battle. The book ends with the Spirit of the Castle sending the two halves into another dimension, where Skeletor is not expected to find them easily. The Power Sword is not featured in the last two books of the first series, Battle in the Clouds and The Vengeance of Skeletor.

The cover of He-Man Meets Ram-Man! shows Skeletor holding a purple sword with a lighter-purple glow. It has the same shape as the Power Sword. The sword is shown in more detail on pages 3 and 4 and finally referred to as Power Sword on page 9. Matching this description and owner, the Power Sword appears in The Ordeal of Man-E-Faces! likewise — on page 5, King Randor says "Look out! He [Skeletor] wields the Power Sword!", reaffirming the identity of Skeletor's weapon. The sword as described (albeit unnamed) appears in The Terror of Tri-Klops! as well.

In The Menace of Trap Jaw!, He-Man wields the grey half of the Power Sword, as confirmed in the climactic moment where he and Skeletor join their halves and hold the full sword by its handle simultaneously while cutting off the power that feeds Trap Jaw (early min. As soon as they are done, the sword is split again, and Skeletor proceeds to try and enter Castle Grayskull, failing as usual.

Princess Adora/She-Ra, He-Man's twin sister, has a companion Power Sword, called the Sword of Protection, which is identical except that it has a glowing jewel in the hilt. She transforms into She-Ra by saying, "For the honor of Grayskull... I am She-Ra!"

The idea of He-Man and Skeletor's swords being two halves of an ultimate power was never referenced in the cartoon. However, this premise was used in Blackstar, a similar Filmation cartoon that aired in 1981, two years before Filmation's He-Man.

In the live action film, Masters of the Universe, the Prince Adam alter-ego is not explicitly shown to exist, and the Sword of Grayskull has a less prominent role. In some parts of the movie He-Man uses laser guns in addition to wielding his sword in close combat. He is also shown as being able to deflect laser beams with the blade in much the same manner as the classic cartoon. The sword serves an ambiguous purpose (if any) in gaining the Powers of Grayskull, as Skeletor has already taken the Sorceress hostage in the beginning of the film and is waiting for the Great Eye to open and give him godlike powers. However, he obtains it once he has captured He-Man and makes a particular point of declaring his possession of it, placing it in a special scabbard-like slot before the eye, possibly suggesting it serves some function in the process. When He-Man breaks free and attempts to retrieve the sword, Skeletor desperately tires to stop him.

The most explicit example of the sword's magical properties comes in the final battle between He-Man and Skeletor, where He-Man draws the sword from the aforementioned slot, while enduring energy attacks from the godlike Skeletor. When He-Man draws the sword out, he shouts "I have the power!" during which the sword glows and blue electricity coarses through He-Man (the film does not specify what this does - it may have healed him or boosted his strength for this fight). As he fights Skeletor, blue electricity from the sword and yellow electricity from Skeletor's staff appear as the weapons make contact, until finally the Power Sword smashes the Havoc Staff, causing Skeletor to lose his new powers and return to normal. At this point Skeletor draws his own black version of the mystic sword for the final stage of the duel, an obvious homage to the classic minicomics depicting Skeletor with one half of the Power Sword (although in this case it is black rather than purple, coordinated to match the character's switch in costume color from the original).

The 1989 He-Man franchise takes He-Man into the distant future to the alien planet Primus. The sword itself is updated to look more futuristic, and is sometimes able to fire bolts of glowing energy. In this series, Prince Adam's phrase to transform into He-Man is changed from "by the Power of Grayskull..." to "by the Power of Eternia..." The He-Man Minicomics show this is caused by the power having been transferred from Castle Grayskull to Starship Eternia, but it goes unexplained in the cartoon. Cringer/Battle-Cat and She-Ra are not part of this series, and in this series Skeletor is not interested in taking the Power Sword for himself.

In the animated remake, He-Man and the Masters of the Universe, the origins of the Power Sword and Castle Grayskull are revised. The castle is revealed to be the former home of an ancient warrior king named King Grayskull, who resembles He-Man but larger and with longer Viking-like hair and a massive green saber-tooth lion as a steed. The Power Sword is King Grayskull's personal weapon, and after fighting a fatal battle with Hordak, the dying king binds his mystical powers to the weapon. Afterwards his advisers become the Elders who seal the castle, and his wife becomes its guardian, the first Sorceress. Therefore, when Prince Adam holds up the sword and calls out "by the power of Grayskull" he is calling on the energies of King Grayskull himself, rather than those of the namesake castle.

The sword was heavily redesigned for the new cartoon, with a much more complex, mechanized look. When held by Prince Adam it appears smaller, however during the transformation sequence, the hilt pivots on an axis and changes shape, taking a new form when it is in He-Man's hands, and is more explicitly shown growing in size in the revised transformation sequence from the second season. Also in this new cartoon, Skeletor possess twin swords that can be combined into one larger sword, a reference to the original concept of the Power Sword(s) from the action figures and minicomics, however this twin sword has no magical properties. According to designers the Four Horsemen, this was due to their original re-sculpts being intended for a continuation of the original storyline in which Skeletor had obtained both halves of the Power Sword (hence the new Skeletor figure's dual blades with clear "good" and "evil" hilt designs), necessitating a new sword to be built by Man-At-Arms and endowed with the properties of the original by the Sorceress. However, Mattel decreed that they wished to reboot the continuity for a new generation of children, and thus the "new" Power Sword design became the "original" version for the new continuity.

In the initial Mattel toy line, the original He-Man and Skeletor figures each came with half of a flexible plastic sword which could be joined into one "complete" sword, corresponding to the storyline in the included minicomic. Each half was cast in the same plastic color as their figures' other accessories - He-Man's in silver, and Skeletor's in purple. The sword halves were re-issued unchanged with Battle Armor He-Man and Skeletor. He-Man's half was also re-cast in golden yellow plastic to be issued with Thunder Punch He-Man, and magenta plastic when issued with Prince Adam. Skeletor's half was re-issued unchanged with Dragon Blaster Skeletor, while it was re-cast in orange plastic and issued with Faker, representing a copy of the original Power Sword. 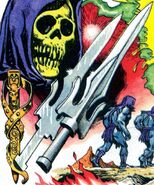 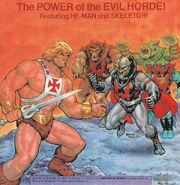 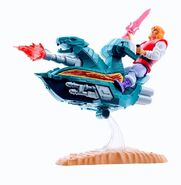 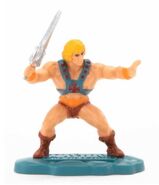