"The Taking of Grayskull"

Prince Adam No More is the 29th episode of He-Man and the Masters of the Universe, written by Paul Dini and directed by Gwen Wetzler. When King Randor prefers the company of He-Man, Prince Adam wants to stop pretending to be a careless goof, even if it jeopardizes his secret identity.

Skeletor, livid at being defeated by He-Man one too many times, banishes a groveling Beast Man from Snake Mountain. He ties his whip in a knot and destroys his seat at the council table, but Beast Man promises that he'll return and show them his true power before Skeletor opens a trapdoor beneath him.

At the Royal Palace, Man-At-Arms has just finished preparing the Attak Trak for King Randor's royal tour of Eternia. He says that only he and the King Randor's "mightiest, most courageous warrior" will accompany the king on the tour, much to the chagrin of Prince Adam and Orko. Orko insists that he won't cause any trouble, but when he accidentally activates the Attak Trak, it seals him inside and doesn't respond to his voice commands as it drives around. Orko only makes matters worse when he tries to switch the Attak Trak off and accidentally starts firing its turret, but Adam transforms into He-Man and stops the Attack Trak by throwing the Power Sword into its treads, then forces it open and deactivates it with a voice command. While Orko fixes the Attak Trak's damaged treads, King Randor shows up to thank He-Man for his aid.

Later, Man-At-Arms warns Prince Adam that King Randor may not choose him as part of his honor guard on the tour because he thinks Adam would embarrass him. The king calls them both before him and says he wants He-Man to accompany him, acting surprised that Adam wanted to come at all and saying that he needs someone as experienced and reliable as He-Man. Adam goes to Castle Grayskull and tells the Sorceress that he has always kept up the image of being fun-loving and carefree in order to keep his identity as He-Man secret, but now wishes he could drop the disguise in order to earn his father's respect. She reminds Adam that he keeps his secret to protect both himself and his loved ones from his enemies, but also encourages him to do what he thinks is right. Adam decides to find a way to earn his father's respect without revealing his secret.

In the wilderness, Beast Man is talking to a group of Shadow Beasts about his banishment and lamenting how far he has fallen when he spots King Randor in the Attak Trak en route to Drisdos City. He decides to prove his worth to Skeletor by capturing the king, and has the Shadow Beasts disable the Attak Trak while he pushes over a tree to block its path. He and the Shadow Beasts overpower Man-At-Arms and Prince Adam (who the king reluctantly allowed to join him on the tour) and take Randor hostage. Beast Man tells Adam and Man-At-Arms to bring all the gold in the Royal Palace to Snake Mountain by nightfall if they ever want the king to be released, then freezes them with Man-At-Arms' freeze-ray to prevent them from following him. Upon arriving at Snake Mountain with his hostage, he finds that Skeletor and the rest of the Evil Warriors have gone on a destruction mission in space and left Mer-Man on guard duty. Mer-Man is impressed by Beast Man's accomplishment, and suggests that they celebrate as he escorts the king to his cell.

Once the effects of the freeze-ray wear off, Prince Adam transforms into He-Man and hops onto a Sky-Sled while Man-At-Arms stays behind to repair the Attak Trak. He-Man arrives at Snake Mountain while Beast Man and Mer-Man are celebrating, setting off the alarm when he rips the door off of King Randor's cell. Mer-Man dispatches a squadron of Hover Robots to recapture the prisoner, but Randor grabs a mace off the wall and helps He-Man destroy them. Randor admits to He-Man that he loves Adam dearly, but it's hard for him to say it sometimes. Beast Man and Mer-Man confront them in the Basher as they turn to leave, but He-Man shatters Mer-Man's sword and throws the Basher into the pile of robot parts when Beast Man tries to ram him with it. He-Man and Randor escape, and Mer-Man warns Beast Man that Skeletor is going to be very angry when he hears what happened. Beast Man is unconcerned, calling Skeletor a "bone-faced creep" and a "loudmouth" without realizing that Skeletor is standing right behind him. Skeletor orders Beast Man to explain himself after he and Mer-Man finish cleaning up the mess, leading Beast Man to remark that "it's kind of nice to be home."

Back in the wilderness, the Attak Trak is up and running again and King Randor has resumed his royal tour with Prince Adam and Man-At-Arms. Randor tells Adam that he could learn a lot from He-Man, to which Adam replies "I think I already have." Randor is confused by this remark, but Adam then insists that it didn't mean anything and asks if he'd argue with someone who had "a good left hook" (a reference to a comment the king made after He-Man's and his fight with the Hover Robots), leaving his father to wonder.

Orko: "Today's story was about love, but a very special kind. It was about the love a parent has for a child. And I bet that's the strongest kind of love there is. Because, for one thing, there's just about nothing that can change it, no matter what. Maybe, like Adam's father, your parents find it a little difficult to say "I love you". Even so, you can be sure they do. Besides, let me ask you something: when was the last time you said "I love you" to them? Bye!" 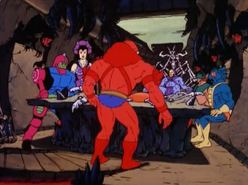 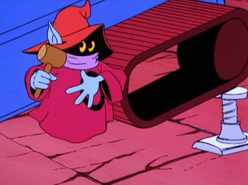 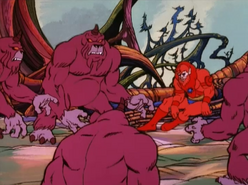 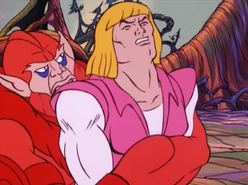 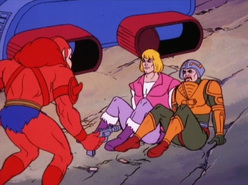 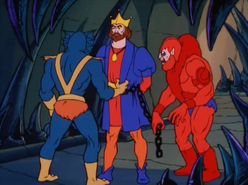 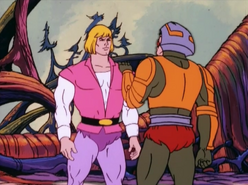 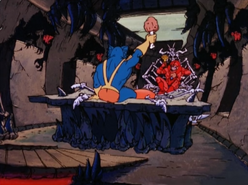 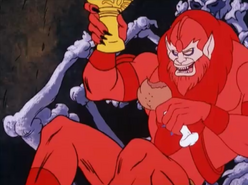 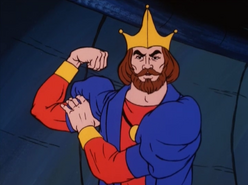 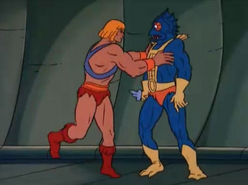 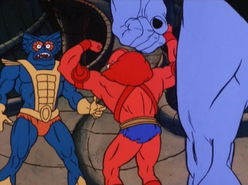 Retrieved from "https://he-man.fandom.com/wiki/Prince_Adam_No_More?oldid=34579"
Community content is available under CC-BY-SA unless otherwise noted.