"Creatures from the Tar Swamp"

Quest for He-Man is the 19th episode of He-Man and the Masters of the Universe, written by Paul Dini and directed by Steve Clark. When Skeletor erases He-Man's memory and vanishes him to an unknown dimension, the heroes of Eternia must seek help from Zodac to save their friend.

Tri-Klops, Trap-Jaw, Skeletor and Evil-Lyn launch an attack against the Royal Palace. He-Man gives chase in a Wind Raider and is joined by Orko. Tri-Klops jeers He-Man, then his War-Sled is destroyed by Ram-Man. Man-At-Arms points a freeze-ray at Tri-Klops and Trap-Jaw baits He-Man to find him. He-Man follows him, but it's a trap and he is caught in a force-field where he is confronted by Skeletor and Evil-Lyn but Orko mange to escape. Skeletor use a spell that erased He-Man's memory then banishes him from Eternia to an unknown dimension, which was witness by Orko. While Skeletor and Evil-Lyn escape, Trap-Jaw failed to get away as he and Tri-Klops were captured then put in jail at the Royal Palace.

Orko, Ram-Man, Man-At-Arms and Cringer go to Castle Grayskull to speck with the Sorceress on the situation. The Sorceress asks Zodac for help in finding He-Man. When Zodac arrived he told everyone that Cringer, Orko and Ram-Man must be the ones to go find He-Man. Also, Zodac gave Orko his wand to find the dimension that He-Man landed on.

Meanwhile, an amnesiac He-Man wakes up in the unknown dimension that Skeletor banished him to where he was confronted by strange animals but they ran away upon seeing his Power Sword. A strange bird-headed woman, named Gleedil, appears where she mistaken He-Man for one of Plundor's minions and believed that he was hurting the strange creatures then shot his Power Sword out of his hand. However, He-Man was able to convince Gleedil that he had never seen those creatures before and that he had no clue as to where he is. When Gleedil subconsciously ask him that he is not one of Plundor's minions, He-Man told her no that he is not then explains to her that he doesn't know who he is. He-Man noticed that Gleedil reminded him of the Sorceress but could't remember who she was because of his amnesia. Realizing that He-Man is telling the truth and wanting to help her new friend, Gleedil takes him to her home. However, little did they know, Plundor is monitoring Gleedil where he see He-Man with her and notice how powerful he is then decided that someone like him could be great use to him.

Before he and his companions leave for their quest, Orko was reminded by Zodac that He-Man will not remember him when he finds him then told him to talk about home and it might help bring his memory back. Arriving in the unknown dimension, Cringer, Orko and Ram-Man start their search for He-Man when they find his Power Sword. Meanwhile, He-Man is brought to Gleedil's Home where she tell him her the planet's name is Trannis and she introduce herself to him. Gleedil tells He-Man, who was curious as to what happen to her planet, how beautiful Trannis was before Plundor ruin the planet with his factory and the population ran the animals out of the planet. Also, Gleedil showed He-Man the pictures of some of the animals that died out completely. Looking at one of the pictures of the animals, He-Man noticed that one of the animals reminded him of Cringer but due to his amnesia he could't remember him. When two of Plundor robots showed up to Gleedil's home, He-Man was able to defeat one of the robots, although he got confused as to how he did it so easily. However, the other robot used sleep smoke to knock out both Gleedil and He-Man then they were taken to Plundor's lair.

While looking for He-Man, Orko, Ram-Man and Cringer ran into Gleedil's pet tiger where he told them about his master and He-Man's capture. Plundor used various loud noises to wake up both He-Man and Gleedil. After regaining conciseness, He-Man and Gleedil find themselves in Plundor's lair. After telling Gleedil that she'll been spending the rest of her days in her dungeon, Plundor offered He-Man a chance to help in his goal of becoming the richest man in the universe. When He-Man asked what Plundor meant by that, he told his guests that he has a magical liquid which is the life force of Trannis then explains to them that he plans to use the magic liquid to make money. Orko, Ram-Man, Cringer and Gleedil's pet tiger were outside of Plunsor's lair where they were thinking of a way to get inside the fortress to rescue their friends but one of the Plundor robots appeared behind them before they had a chance to think of a plan. Plundor asked He-Man for his answer as he told him that he could use those muscle of his. However, despite not knowing where he came from or what his name is, He-Man refused to help Plundor as he knew what he was doing to Trannis was wrong. Before He-Man and Gleedil were thrown in the dungeon by Plundor, Orko, Ram-Man, Cringer and Gleedil's pet tiger showed up with a defeated robot which shocks Plundor of their arrival. When Ram-Man mention him by name, He-Man was surprise as to what he called him. Plundor pushes one of his button to signal his robots to come to his lair and take care of everyone.

Approaching his friend, Orko asked He-Man if he remembers anything but he asked him if he knows him. Remembering what Zodac said, Orko told He-Man that if he talk of home to him that his memory might come back but he can't remember where that is. While Ram-Man was dealing with more of Plundor's robots, Orko realizes that Castle Grayskull is the answer then has He-Man follow him, which he not only does but also shows that he trust him despite not remembering him. Orko took out He-Man's Power Sword then gave it back to him and had him say by the power of Greyskull. Through the power of Grayskull, He-Man was able to get his memory back. When Plundor put his magical liquid into a rocket, He-Man defeats him by stopping the rocket as it exploded and the planet is returned to normal. Gleedil has Plundor destroy his own lair as punishments for his crimes while He-Man and his friends return to Eternia.

Zodac: "In today's story, He-Man came to the aid of a planet whose natural resources were being wasted. Unfortunately, this same waste is happening now, and not on a distant planet, but right here on Earth. We must respect the plants and animals before they disappear, as some species already have. There's beauty all around us. Protect it, before it's too late. " 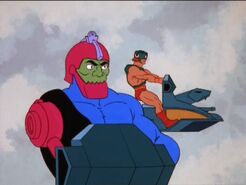 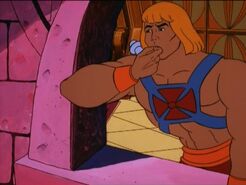 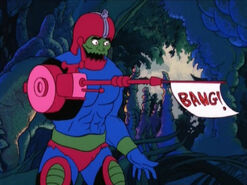 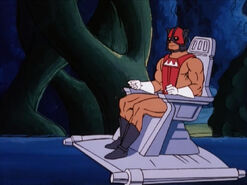 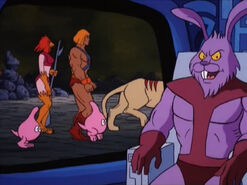 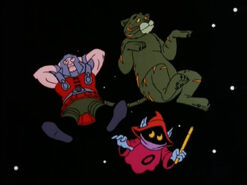 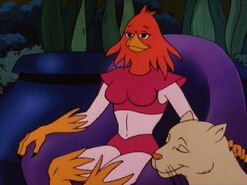 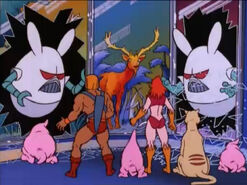 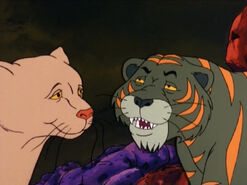 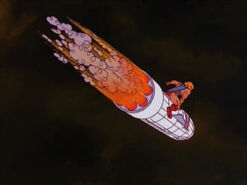 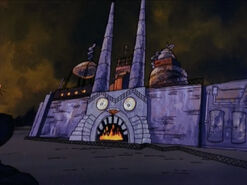 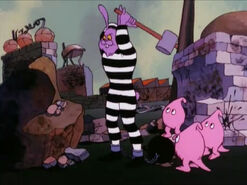 Retrieved from "https://he-man.fandom.com/wiki/Quest_for_He-Man?oldid=32478"
Community content is available under CC-BY-SA unless otherwise noted.