The Horde (formerly)
The Rebellion

Lauren Ash
Force Captain Scorpia is one of the main characters in the Netflix Original series She-Ra and the Princesses of Power. She is a member of the The Horde. Scorpia is gregarious and enthusiastic and grew up within the Horde. Super strong, Scorpia is often unaware of just how strong she is which often causes her to be clumsy. Scorpia is revealed to be a Princess but her family surrendered and joined the Horde, marking them as outcasts and shunned from the Princess Alliance. She is eager to please and falls easily into the role of a minion. She is socially awkward and used to rejection, even though she wants to have friend. Despite her loyalty to the Horde, deep down Scorpia has a good heart. She leaves the Horde and Joins the Rebellion.

Scorpia is extremely loyal to Catra, considers her to be her best friend (a fact she joyfully likes to repeat, much to Catra's annoyance), and would do anything for her. However, Scorpia's lack of friends during her who life (Catra essentially being the first friend she ever hard), she tries too hard to please her and is made oblivious to the mean way Catra treats her. Although Scorpia was very loyal to the Horde, being basically the only place she's ever known, she cares about Catra so much that she was willing to leave the Horde if she does. Catra refuses that offer, and things get worse in their relationship when Scorpia watches Catra taze Entrapta, and then Catra threatens to taze Scorpia too if she does anything about it. Scorpia thus starts to realize the real nature of Catra. However, at the beginning of season four, we can still see that she continues to try to be Catra's friend. However, Catra ends up yells at her that they are not friends, and leaves Scorpia sitting sadly on a balcony. Scorpia's last gesture to Catra is making her her family's special tea recipe, but soon, Scorpia comes to her senses and is done, she calls Catra a bad friend, leaving with Emily in sadness. After arriving on Bright Moon, Scorpia learns that Shadow Weaver is the reason why Catra was acting the way she was back in Season 3 and is sad that Catra has lost her way because of her. Scorpia still has a soft spot for Catra in her heart and tells Glimmer not to hurt Catra, even though that Catra has done a lot of bad things she still cares about her, as Scorpia points out to Glimmer that Catra is lonely deep inside and has forgotten where her happiness lies. In the series finale, Scorpia and Catra finally reunited after Horde Prime's defeat, with a remorseful Catra trying to make amends with her, but Scorpia quickly forgives her before she gets to apologise, proving that she was never angry with her, but was sad that Catra had lost her way and forgotten who she was.

Like the rest, she generally use Kyle to throw the blame or do hard work.

Because of Scorpia finding Catra to be her very best friend, and the only one she's ever had, she is shown to be jealous of Adora's former relationship with Catra and the fact that Adora still knows things about Catra that Scorpia doesn't. This, although Scorpia and Adora are shown to have bonded somewhat in both the episodes, "White Out" and "Remember". After season 4, they are on the same side but have been too busy to interact much with each other.

Scorpia quickly takes a liking to the girl, and is Scorpia's second best friend. She is saddened when Catra sends Entrapta away, but doesn't interfere because she is so loyal to Catra. Scorpia cares for Emily when Entrapta is gone, and she misses her extremely. She realizes that she was wrong to just stand by and watch while Catra hurt her, and she leaves the Horde to go save Entrapta because she is the only one who knows her true whereabouts.

Glimmer is kind to Scorpia, and relates to her about not fitting in. But Glimmer manipulates Scorpia, using her kindness against her by overselling what the Heart of Etheria can do, and saying that she can save everyone. Even Catra, which is a huge lie. She calls Scorpia awesome in battle, and Scorpia looks happy and flattered, probably not being used to being complimented.

She is the quickest to warm up to Scorpia, she is moved that Scorpia wants to learn to be good friend, and offers to help Scorpia learn about friendship. She offers Scorpia a salad as a snack, and is very concerned for her that she never got to eat vegetables. They become very good friends.

Scorpia has pincers and a prehensile tail not dissimilar to a scorpion's. Her tail's tip can inject venom that will stun any enemies it comes in contact with. She is extremely strong, possibly one of the strongest species on Etheria. She can lift Rogelio, Kyle, and Lonnie all at the same time. She also gains lightning powers. 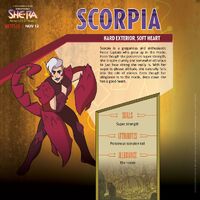 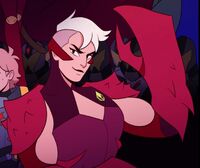 Hmm, seems familiar but I can't put a thumb on it...

Retrieved from "https://he-man.fandom.com/wiki/Scorpia_(She-Ra_and_the_Princesses_of_Power)?oldid=36862"
Community content is available under CC-BY-SA unless otherwise noted.