Wiki Grayskull
Register
Don't have an account?
Sign In
Advertisement
in: Characters, Females, She-Ra and the Princesses of Power characters,
and 5 more

Shadow Weaver is one of the the three secondary antagonists (alongside Catra and Hordak) of the 2018 Netflix original series She-Ra and the Princesses of Power.

She is a powerful sorceress and was Hordak's second-in-command of The Horde. Shadow Weaver joined Hordak in exchange for more power. She raised Adora and Catra in the Fright Zone. She's currently at Bright Moon as an ally of The Rebellion solely for revenge against the Horde.

She is voiced by Lorraine Toussaint.

Shadow Weaver appears to be domineering, manipulative, deceptive, abusive and easily prone to anger. (Especially with Catra). She seemingly does not like to be told no or having her authority questioned, since this usually results in angry, destructive outbursts of rage. She will defy Hordak’s orders to achieve her own goals since she ordered Catra to bring Adora back even though Hordak explicitly stated not to. She refuses to comply with anyone other than herself (seemingly so), and does not like to be treated with mediocrity. Shadow Weaver possesses a strong element of intimidation and fear among the ranks of the Horde, especially the training cadets.

She has always harbored extremely negative feelings toward Catra (which has been so since she was a little kid) while treating Adora as her favorite (a result of Shadow Weaver's desire to have Adora's magic for herself). This clear line of separation, as well as the mental and physical abuse, eventually lead to Catra’s constant need to prove herself to everyone and the beginning of her claw to power. Shadow Weaver's manipulation also causes Adora to develop a Hero Complex, leading Adora to start trying to "protect" Catra from punishments (by trying to pin the blame on herself) and unwittingly make Catra feel inferior.

Shadow Weaver resents Catra for not only disobeying her orders and failing to return Adora after a series of bungles, while she believed Adora had a strong, powerful potential in her.

Shadow Weaver knew Adora was She-Ra, which may have influenced her later decision to attempt to erase Adora’s memory of her almost-invincible alter-ego. Shadow Weaver has an extremely famous reputation of constant manipulation.

Shadow Weaver originally lived in Mystacor as Light Spinner. Her lust for power and control eventually caused her to be cast out. She would later go on to join Hordak in exchange for more power. Sometime afterward she found Adora as an orphaned baby and took her in as her ward after seeing potential in the child. She would eventually come to take Catra in as her ward as well. As the two girls grew Shadow Weaver became impressed with Adora's skills while always seeing Catra as a disappointment.

Adora: Shadow Weaver "found" Adora as an orphaned baby. She decided to take Adora in as her ward because she saw potential in the child. As Adora grew Shadow Weaver acted like a commanding officer and mother to her, albeit not a nice one. She taught Adora how to read, tie her boots, how to fight and be victorious. Shadow Weaver always saw Adora as her favorite. She also refused to allow Adora to leave her claws, as she constantly sent Catra out on missions to return her to the Horde. She even attempted to erase Adora’s memory in order for her to effectively control her once more, though this plan was foiled by Glimmer. She still seems to refuse to let go of Adora as after Shadow Weaver escapes from the Horde at the end of season 2 she is last seen standing over a sleeping Adora.

Catra: There are multiple examples shown when Shadow Weaver shows clear favoritism of Adora over Catra. When Shadow Weaver caught young Adora and Catra as little children in the room with the Black Garnet, she scolded and threatened to kill Catra for coming in without permission, while she simply fixed part of Adora's hair, asked her to keep Catra under control, not to let it happen again, and then patted her on the head. She sees Catra as nothing but a disappointment, a liar, impertinent, and stubborn. Because of this constant abusive treatment, Shadow Weaver was inadvertently responsible for the onset of Catra’s claw to power in the Horde. In a fit of rage Catra destroyed Shadow Weaver’s power generator in her mask, thus eliminating her ability to wield power from the Black Garnet and maintain any sorceress abilities. Catra became the Horde’s second-in-command in her place. Shadow Weaver became a prisoner, serving as an info source to Catra until she tricked her former ward into providing the means for her to escape.

Micah: Shadow Weaver had a close relationship with Micah as his mentor. She recognized his great innate talent, while he supported her in wanting to defeat the Horde when the other members of Mystacor declined.

Shadow Weaver is a powerful sorceress who can control shadows and create shadow constructs. Much like her 1985 counterpart, she can conjure up monsters, utilize mind manipulation and create extreme situations with her shadows 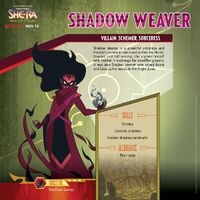 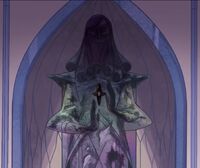 Statue of Light Spinner in Mystacor.

Shadow Weaver takes Glimmer, Bow and their friends to the Fright Zone using power of the Moonstone.