Princess Adora
The Most Powerful Woman In the Universe

Leader of the Great Rebellion

"A female He-Man!!! This is the worst day of my life!"
―Skeletor after kidnapping Adora but then facing She-Ra for the first time[src]

She-Ra is the principal figure of the Princess of Power brand, the heroine alter ego of Princess Adora, and the twin sister of He-Man (Prince Adam). She is featured in the animated series of the same name, an attempt to make a version of the Masters of the Universe cartoon series that would appeal to young girls.

She-Ra is introduced in the animated movie The Secret of the Sword as Force Captain Adora, an agent of the Evil Horde that rules the planet Etheria. However, she then discovers that she is the long-lost twin sister of Prince Adam of Eternia, having been kidnapped by the Horde's primary Commander on Etheria, Hordak, as a baby. In the same story, she is granted the Sword of Protection - which parallels He-Man's Sword of Power - and gains the ability to transform into She-Ra. As Princess Adora, she then joins the Great Rebellion that seeks to free Etheria from the Horde. Only a few characters know that Adora is in fact also She-Ra, her twin brother Prince Adam/He-Man, Cringer/Battle Cat, The Sorceress, Man-At-Arms, Orko, Spirit/Swift Wind, Light Hope, Madame Razz, Kowl and Loo-Kee.

Main article: She-Ra (She-Ra and the Princesses of Power)

One of the only major differences between She-Ra and Adora is that the former possesses waist-length blonde hair, which she holds back with a winged, crown-like headdress. She wears a short white dress decorated with metal patterns, as well as a red cape, golden boots, and long golden bracers that extend from her elbows to her wrists. Otherwise, her features are the same as Adora's, with blue eyes and red lips. She carries a sword with a crystal in the middle in a scabbard (that seems to only appear when she needs it) on her back.

She-Ra, like He-Man, is a strong-willed, forceful individual who believes firmly in doing the right thing, and encouraging others to do so. She’s warm-hearted, reasonable and noble and often displays a sharp sense of humor--even whenever she’s fighting her foes. The differences between them are subtle, and can likely be traced back to Adora's time as a Force Captain for the Horde.

She-Ra is a good deal more strategic than He-Man. In the episode "Huntara," the titular character tried to ensnare She-Ra in a series of traps, which she out-thought or out-maneuvered before she ultimately disarmed Huntara in a direct confrontation.

Like He-Man, She-Ra exhibits fierce loyalty. Once a bird attacked her and she helped its harmed wing, demonstrating compassion and forethought, even against her friends' wishes.

She-Ra displays a number of above average physical abilities and numerous supernatural abilities. She has super-human strength, enhanced speed, reflexes, and near-invulnerability.

She has communicated with animals via telepathy, such as Swift Wind, and a bear in the Whispering Woods.

In the episode "The Unicorn King," she demonstrated the ability to heal injuries by touching the damaged wings of a unicorn. In The Secret of the Sword, she also healed Swift Wind when he was injured by a Horde shot.

She has the ability to transform her chief weapon, "The Sword of Protection," into other weapons, including a shield, boomerang, bola, lasso, and a giant handcuff. It can also be transformed into tools, including a ladder and a space helmet. The stone embedded in the Sword can project laser-like energy beams and is the source of the Sword's power. As seen in The Stone in the Sword, if the stone is damaged, Adora cannot become She-Ra unless it is somehow repaired. He-Man cannot do any of this with "The Sword Of Power," his own chief weapon.

While She-Ra displays various abilities, her sword is her primary means of attack and defense. 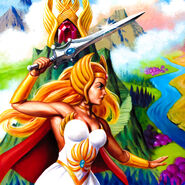 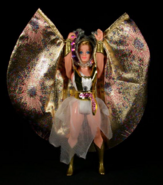 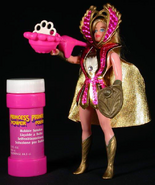