"The Curse of the Spellstone"

Teela's Quest is a first season episode of the animated television series He-Man and the Masters of the Universe, produced in 1983. It was the second episode to be screened but was the sixth episode in the production order. Written by Paul Dini, directed by Marsh Lamore.

Using Man-At-Arms' memory projector, Queen Marlena recalls her crash-landing on Eternia; she was an astronaut from Earth, before she was stranded and met King Randor. Prince Adam asks her if she misses Earth, and she replies that she would not trade her life on Eternia for anything. Teela comes looking for the prince, who is late for his combat practise. She uses the memory projector on Adam, revealing that he went fishing instead. Meanwhile, Orko is tinkering in Man-At-Arms' workshop, trying to create a music box; the box actually contains explosives, and it explodes in the laboratory.

Orko escapes as Teela comes in to talk with her father. She tells him that she wishes she had a mother like Adam does, and that she would like to know about her biological parents. Man-At-Arms tells her that her father was a great warrior who was killed in battle, that he is proud of adopting Teela, but that her mother's identity is a secret which he promised never to reveal. Teela tries the memory projector, but her recollections are only of Man-At-Arms.

Frustrated, she tells Orko that she will ask the Oracle of the Crystal Sea who her mother is. Orko accidentally blurts her plan to Adam and Cringer, prompting them to transform and follow her for her own safety. At Snake Mountain, Skeletor and Mer-Man are spying on Teela; Mer-Man wants to use her to seek vengeance on Man-At-Arms for a past grievance. Shadow Beasts attack Teela as soon as she arrives in the Crystal Sea, but she fends them off with few problems. Teela finds the Oracle, who tells her of how Man-At-Arms was once summoned to the nest of Zoar the falcon: Mer-Man and his allies were trying to capture Zoar so that they could use her as a sacrifice to a sea demon. Zoar could have flown away, but she was protecting something in the nest; Man-At-Arms defeated Mer-Ma, but before the Oracle can finish his story he is interrupted by Mer-Man.

Orko alerts the Sorceress of the situation, as Mer-Man chains Teela and explains to her that twenty years ago, her father rescued a victim he had selected for the sea demon Bakkull. Mer-Man uses the Crimson Pearl to summon the demon, but He-Man smashes through the wall and frees Teela with his sword. Zoar grabs Mer-Man's staff and drops it, destroying the Crimson Pearl inside. Immediately, Bakkull turns against Mer-Man; He-Man rescues the villain, then pushes down the ice structure on which Bakkull stands, burying the beast in an avalanche.

Teela returns to the Oracle, who finishes his story, revealing that Man-At-Arms found a baby girl in the nest, whom Zoar had hoped to raise in the mountains safely, but realized she could not after Mer-Man's attack. The Sorceress enters as the story finishes, and confirms that she is Teela's mother. She informs her stunned daughter that it will one day be Teela's time to take her place, but that until then she must not know for her own safety. The Sorceress removes her only daughter's memory of the revelation, as a tear runs down her cheek.

Teela: "In today's story, I went in search of my mother. I found her, but I also found something else; that the man who had cared for me since I was a baby, who loved me as he would his own daughter, was just as much my father as any parent could be. And so whether they are someone we were born to or whether they chose us to adopt, it doesn't matter. The ones who protect us, and teach us, and love us; they are the ones we call mother and father. And they deserve the same kind of love from us. Until next time." 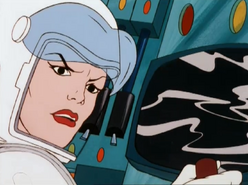 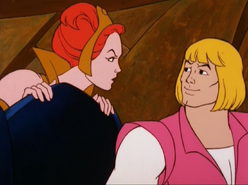 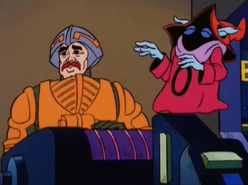 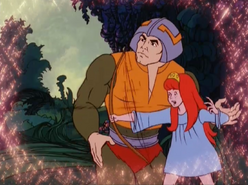 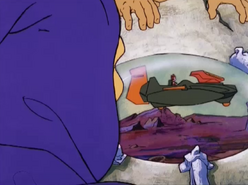 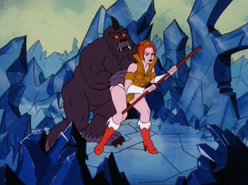 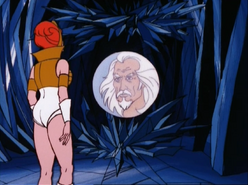 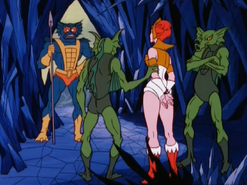 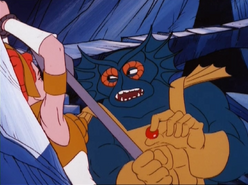 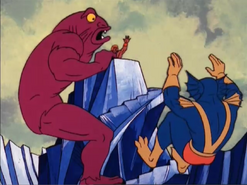 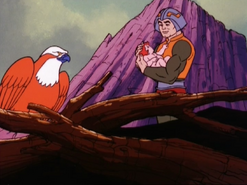 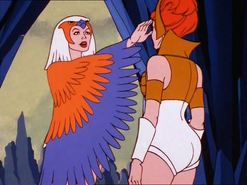 Sorceress erased Teela's memories to forget about her daughter. 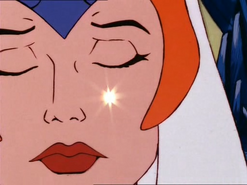 Sorceress' tears.
Add a photo to this gallery

Retrieved from "https://he-man.fandom.com/wiki/Teela%27s_Quest?oldid=28203"
Community content is available under CC-BY-SA unless otherwise noted.