View source
watch 01:39
Hawkeye Is Here To Amaze - The Loop
Do you like this video?
Play Sound

The Dragon's Gift is the 34th episode of He-Man and the Masters of the Universe, written by Larry DiTillio and directed by Lou Zukor.

Skeletor, posing as Ambassador Therin from the Kingdom of Eastfen, visits the Royal Palace with a jade bust for King Randor. Man-At-Arms recognizes Skeletor's sword and grabs the bust before the king can touch it. It crumbles in his hands, and the Weird of Crystal turns him into a crystal statue. Teela fights Skeletor, who flees when He-Man and Battle Cat arrive, then goes with He-Man to ask the Sorceress of Castle Grayskull how to undo the spell. The Sorceress says that the Weird of Crystal is more ancient than Castle Grayskull itself and beyond her power to reverse, but tells He-Man and Teela that Granamyr, the most powerful of all dragons, might know the answer. Due to a pact she once made with the Dragons of Darksmoke, she cannot tell them where to find him, but she sends them to the royal library to take advantage of "human knowledge." Here, He-Man reads that Ice Trolls and dragons are friends and deduces that Darksmoke is located in the Ice Mountains.

He-Man, Battle Cat, and Teela use the Wind Raider to fly north across the Mystic Mountains, but a protective field causes them to crash before they reach Darksmoke. They finish their journey on foot, evading an avalanche and defeating Ice Hackers and a pair of Ice Trolls that attack them along the way. When they encounter Granamyr, he is unimpressed by the legends he has heard of He-Man and annoyed by Teela's lack of respect, and threatens to banish her to the Realm of Demons. He-Man says they are willing to fight him to make him listen, but Granamyr binds them with his magic. He-Man impresses him by trying to break his bonds, and Granamyr agrees to listen to what they say. When he hears about the Weird of Crystal, he says that he knows how to reverse it, but he is tired of dealing with humans who beg for his help and offer nothing in return. When they ask him what gift he wants in return for his favor, he tells them to bring him Skytree, the oldest tree and living thing on Eternia, so that he can watch it burn in his fire pit. He says he will send them to the Forgotten Forest to chop the tree down, but warns them that he will send them to the Realm of Demons forever if they return empty-handed.

In the Forgotten Forest, He-Man and Teela meet Tullamore, a Treeprechaun who protects the forest. When he learns what they plan to do to Skytree, he sics a pack of wolf-like creatures on them and tries to get the trees to crush them in their branches. Skytree, however, wants to know why He-Man and Teela intend to do it harm, so they tell it about Man-At-Arms' transformation by the Weird of Crystal and the bargain they made with Granamyr. Skytree recalls that an old Man-At-Arms saved the Forgotten Forest from the Witches of Fire, for which the ancient tree is still in his debt. It says that it has stood for ages, but it will continue to exist as long as a tree grows anywhere in Eternia, and agrees to sacrifice itself to save Man-At-Arms. Tullamore protests, and cries when Skytree stands by its decision. He-Man and Teela decide not to chop the tree down, saying that Man-At-Arms would have done the same thing, then call out Granamyr's name to return to him as Tullamore jumps for joy.

Upon returning to Darksmoke, He-Man and Teela tell Granamyr that they do not have his gift. He-Man says that a tree has as much of a right to live as a human or a dragon does, so they will not take a life to save a life. He offers to bring Granamyr another gift or be sent to the Realm of Demons in keeping with their bargain. Granamyr, thoroughly impressed by the wisdom, compassion, and honor that He-Man and Teela have demonstrated, accepts his renewed faith in humankind as a gift and gives them a book that contains the knowledge needed to reverse the Weird of Crystal. Teela tearfully thanks him, but Granamyr says that they can best thank him by letting him sleep, and never bothering him again.

Teela: "Today He-Man had to decide whether or not to chop down a tree. Now, the trees around you probably don't speak the way Skytree did. Or if they do, we haven't learned to hear them... yet. But trees are living things. And when you respect a tree, you show that you care about all life. Life is a wonderful, precious gift. Learn to enjoy and respect it and you'll be a happier, better person for it. Bye for now." 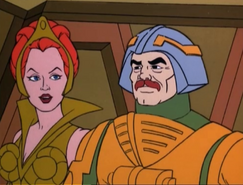 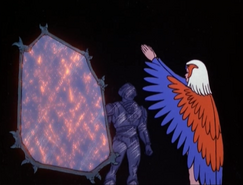 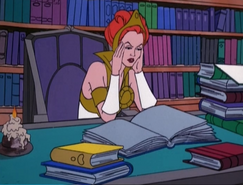 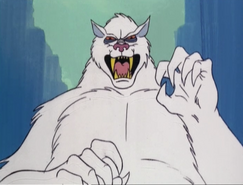 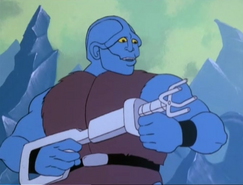 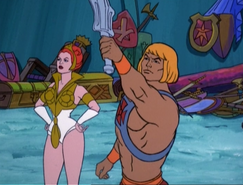 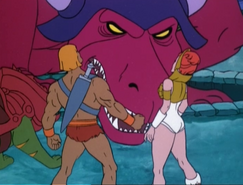 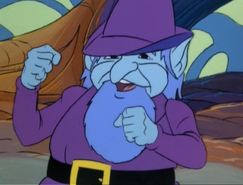 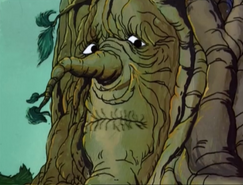 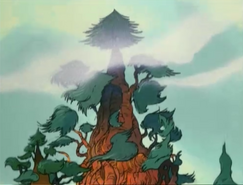 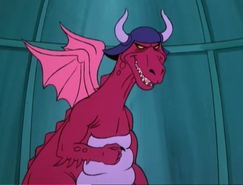 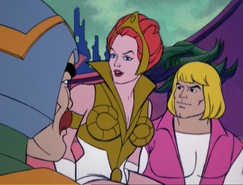