"The Rarest Gift of All"

"Origin of the Sorceress"

The Great Books Mystery is the 72nd episode of He-Man and the Masters of the Universe, written by Harvey Brenner and directed by Bill Reed. Eternia faces an unprecedented crisis when its most precious resource - information - is stolen by a dangerously clever villain, whom Skeletor would like to meet.

Orko has lost the book about unicorns that he intended to give Prince Adam for his birthday. Man-At-Arms and Teela are dubious that the book would simply disappear, but later Professor Smallen reports to King Randor that all the books in the ancient archives have disappeared. The king sees this as a great tragedy, since the kingdom's books are the information at the foundation of civilization.

Randor summons Adam and Man-At-Arms, who quickly conclude that a sinister plot is afoot and He-Man is needed. Adam makes excuses himself and then transforms himself and Cringer into He-Man and Battle Cat before they consult the Sorceress. Meanwhile, Teela and Orko follow their own lead--a lone book left laying on the south road out of the kingdom.

In his hideout at the Temple of the Sun, Batros congratulates himself for having the wisdom to recognize the value of the books he has stolen. The people of Eternia, he reasons, will be so desperate to regain the books that they will force Randor to abdicate and make him the new ruler. Batros does not suspect that he is being admired from afar by Skeletor, watching from Snake Mountain. Beast Man doesn't comprehend Batros's scheme, which simply reinforces Skeletor's opinion that he needs smarter henchmen. He sends Beast Man and Trap-Jaw to recruit Batros to help him raid Castle Grayskull.

At Grayskull, the Sorceress directs He-Man to the Temple to confront Batros. He-Man is surprised to hear that the villain is not staying on the dark side of Eternia; the Sorceress explains that he has come with a thirst for power. He-Man takes the south road into the desert, but Skeletor uses his magic to delay the hero until his lackeys can make his offer to Batros.

Teela and Orko are the first to reach the Temple, but when they locate the books, Batros takes them prisoner. While he gloats about his plan, Trap-Jaw and Beast Man get the drop on him. Although Batros is interested in meeting with Skeletor, he doesn't appreciate the villains' attitude, and teaches them a lesson with his magic. While Batros forces Beast Man to escort him back to Snake Mountain, Teela and Orko subdue Trap-Jaw and recover Orko's unicorn book.

When Batros comes face-to-face with Skeletor, they quickly butt heads over which of them will follow the other. Finally Batros agrees to hear Skeletor's proposal: If they work together to seize Castle Grayskull, Skeletor will have the power to rule the universe, and Batros will be allowed to have Eternia. Within moments, Batros has a plan to take the castle.

By the time He-Man and Battle Cat reach the Temple of the Sun, they find the books and Trap-Jaw, but no sign of Batros. Teela and Orko have already returned to the Royal Palace and told Man-At-Arms about Batros's alliance with Skeletor; he passes the word along to He-Man, who races back to Grayskull.

Batros's strategy to take the castle is simple: While Beast Man, Mer-Man, and Tri-Klops distract the Sorceress at the front wall, Batros will create a bridge to approach from another direction and outflank her. The plan fails before it can begin when He-Man arrives, sending Battle Cat to handle Beast Man's team while he faces Skeletor and Batros. When He-Man blocks the villains' path on Batros's bridge, Skeletor flees. Batros, however, blasts the bridge out from under the hero, who falls into the bottomless pit surrounding the castle. He-Man catches a rocky outcropping on the way down, though, and surprises Batros by throwing back to the dark side of the planet.

Meanwhile, Man-At-Arms, Teela, and Orko return to the Temple of the Sun to recover the books, only to find they've disappeared yet again. When He-Man is notified, he heads to Snake Mountain, suspecting that Skeletor has usurped Batros's original plan. As He-Man and Battle Cat make their way into the mountain, they are almost immediately captured. Once Skeletor thinks he has them helpless he freely gloats about where he is keeping the books; once they have the information they need, though, the heroes easily free themselves and chase Skeletor away.

Later, everyone is assembled in the palace to celebrate the safe return of the kingdom's books, as well as Adam's birthday. Adam is particularly grateful for Orko's unicorn book...as well as an assist in blowing out the candles on his cake.

Teela: "You sure have your hands full."
Orko: "Well, I have lots of reading to catch up on."
Teela: "Good for you, Orko. You know, when you open up a book, you're really opening a door to a wonderful world of entertainment and information."
Orko: "That's for sure. I'm finding out all about science and dragons and sports. But mostly bodybuilding!"
Teela: "You have a book on bodybuilding?"
Orko: "No, but carrying all these books sure builds my body."
Teela: "Oh, Orko."

(Queen Marlena, Mer-Man, and Tri-Klops appear in this episode, but do not receive dialogue.)

As featured in BCI's He-Man and the Masters of the Universe: Season Two, Vol. 1 DVD boxset (Disc 1) 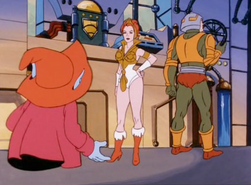 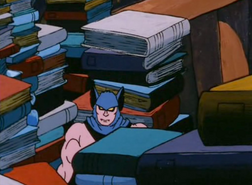 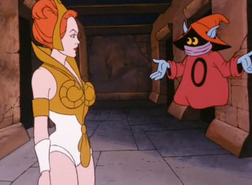 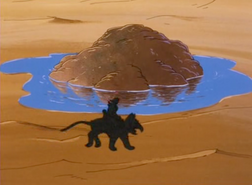 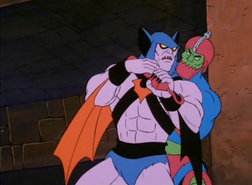 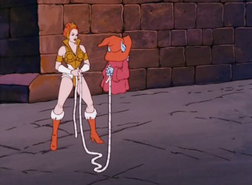 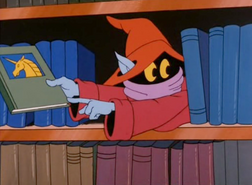 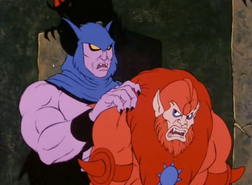 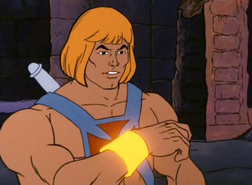 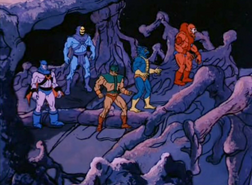 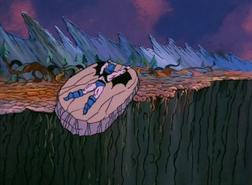 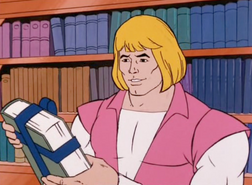 Retrieved from "https://he-man.fandom.com/wiki/The_Great_Books_Mystery?oldid=29976"
Community content is available under CC-BY-SA unless otherwise noted.