Wiki Grayskull
Register
Don't have an account?
Sign In
Advertisement
in: Animated series, The New Adventures of He-Man

The New Adventures of He‑Man

The story continues the adventures of He-Man from the two previous Filmation series: He-Man and the Masters of the Universe (1983) and She-Ra: Princess of Power (1985). The storyline saw He-Man removed from Eternia and into a more heavily sci-fi accented setting, where he continues his battle against Skeletor.

The New Adventures of He-Man opens during the ongoing conflict between the peaceful people of the planet Primus and the war-like Evil Mutants of Denebria. Under constant attack from the Mutants, the leader of Primus, Master Sebrian, looks to the past for a hero who can defend the planet. Sebrian sends two Galactic Guardians - Captain Hydron and Lieutenant Flipshot - to Eternia via time travel, where they are tricked into believing that Skeletor is the hero they seek. Before Skeletor can abscond to the future, He-Man arrives and engages him in battle, forcing Hydron and Flipshot to return to the future with both He-Man and Skeletor in tow.

Once they arrive on Primus, Skeletor quickly allies himself with Flogg and his Mutants, while He-Man becomes the new champion of Primus and its people.

The show was intended to be a continuation of the Filmations series which had ended several years earlier, though the change in production company from Filmation to Jetlag studios resulted in a different animation style and voice cast. The only characters from the classic series who appeared regularly in the show were He-Man, Skeletor and The Sorceress, with King Randor, Queen Marlena and Teela making cameo appearances. The significantly different character designs (to coincide with the new He-Man toyline) and shift from fantasy to sci-fi turned many fans off from the series at the time of its debut.

Despite this, the show had a strong sense of continuity and consistent character development and storytelling, with the majority of episodes and series bible being penned by Jack Olesker. The animation was of a high standard, with a much stronger anime influence. While unpopular with He-Man fans for many years, the show received a much warmer reception when it was released on DVD in 2006.

Though the series was not renewed for a second season, Jack Olesker has gone on record as saying that a second season would have involved He-Man's return to Eternia[1].

DVD set volume one with the first 33 episodes 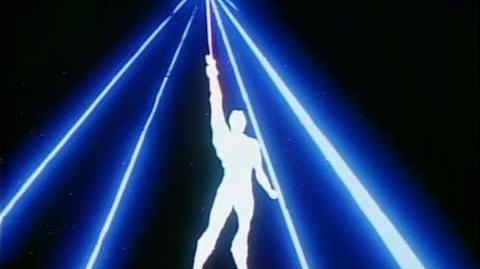 The New Adventures of He-Man Intro