Things That Go Bump in the Night

"Three on a Dare"

Things That Go Bump in the Night is the 87th episode of He-Man and the Masters of the Universe, written by John Curtin and directed by Lou Kachivas. A young boy must overcome his great fear to help He-Man stop Skeletor and save his father.

King Randor is celebrating his birthday in the Royal Palace when Orko's magic backfires. Distraught, Orko runs off and finds the Stratoblaster that the others mean to present to Randor as a birthday gift. Orko fools around with the vehicle just a little too much, and soon Prince Adam, Teela, and Man-At-Arms find him in careening out of control. Teela and Duncan go after him in a Wind Raider while Adam becomes He-Man. By the time the Wind Raider has caught up with the Stratoblaster, it has crashed in a garbage dump near Snake Mountain.

Skeletor orders Clawful, Evil-Lyn, and the newest Evil Warrior, Glitch to attack the intruders. Glitch, in chains, is having second thoughts about joining Skeletor's team, but Skeletor will have none of it. While Man-At-Arms and Teela are repairing the Stratoblaster, they are confronted by the villains and a squad of Hover Robots. Just in time, He-Man arrives to even the odds and chase off the attackers.

Later in Snake Mountain, Skeletor berates his minions and challenges them to cross a thin laser beam over a deep chasm. Evil-Lyn and Clawful manage to do it, but Glitch knows better than to try such a dangerous stunt, and begs Skeletor not to make him go through with it and let him go. Irritated, Skeletor has Clawful take Glitch to the Enchanted Forest, to let him find his own way home.

Just as Man-At-Arms completes the repairs, Prince Adam and Cringer show up to lend a hand. Coincidentally, they see Clawful drop Glitch off nearby and Teela goes to help the boy. He begs them to help him through the forest, and tells them that he is the prince of Sallasia. When the heroes bring him back to the palace, Glitch assures the king and queen that his father will pay whatever ransom they desire. Orko concludes that the boy is afraid of everyone and everything, but Adam decides that he just needs some space for a while. Man-At-Arms can't help being reminded of Prince Adam when he was a boy.

Sometime later, Adam, Cringer, and Glitch return to the Enchanted Forest to get to know one another. Glitch admits that he ran away from home to join Skeletor, in the hopes that it would help him overcome his fears. Purely for his own amusement, Skeletor decides to torment Glitch by magically sending the plants to attack him and the others. Before Adam can think of a way to turn into He-Man without being seen, he is tripped and knocked unconscious. Realizing he has to go for help, Glitch is forced to face his fears and travel through the forest alone while Cringer stays with Adam. However, Cringer has fortunately managed to stir Adam just enough to get him to summon the power of Grayskull, reviving him as he is transformed. Together, He-Man and Battle Cat dispatch with the plants that were menacing them. By the time Glitch returns with Teela and Man-At-Arms, Adam and Cringer are safe and sound.

Meanwhile, King Sallas arrives in a powerful spaceship to attack Snake Mountain and retreive his son. However, the king is unfamiliar with Eternia, and Skeletor easily trick him into believing that Randor is the villain who has captured the boy. Soon the giant rock-like ship is hovering over the palace, surrounding it with a wall of stalactites, and Adam and Cringer must again make excuses to go turn into He-Man and Battle Cat. By the time Glitch can convince Sallas that he's been misled, Skeletor has gained control of the ship and threatens to continue the attack. He-Man strains to lift the ship off of the enormous wall and push it down to the ground. Down but not out, Skeletor holds Sallas hostage within the ship, and dares Glitch to come save him. He-Man suggests that Skeletor pick on someone his own side, but Glitch insists on answering the challenge. Skeletor shows no interest in letting Glitch or his father go, but Glitch courageously grabs his Havoc Staff and distracts the villain long enough for He-Man to intervene. Together, He-Man and Sallas subdue Skeletor and launch him into parts unknown.

Later, the Sallasian ship's magnetic beams are running low and they must head home. Glitch's father thanks Randor for taking such good care of his son, and the Sallasians say goodbye to the Eternians. Prince Adam and Cringer show up just a little late for the farewells, but just in time for lunch.

Adam (using He-Man's voice): "Is there something that frightens you? Are you afraid of water of high places? I used to be afraid of the dark when I was little. Some fears are good if they make you more careful. Fear of fire may save you from a burn. Fear of getting hurt may make you think twice before trying something. So fear is nothing to be concerned about. As a matter of fact, it's healthy. So don't worry. Only a fool fears nothing. Now I'm afraid it's time to go. Bye for now."

As featured in BCI's He-Man and the Masters of the Universe: Season Two, Vol. 1 DVD boxset (Disc 4) 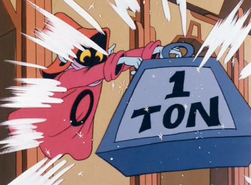 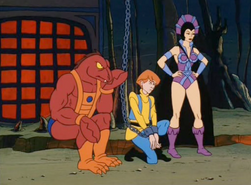 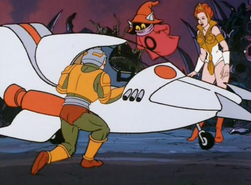 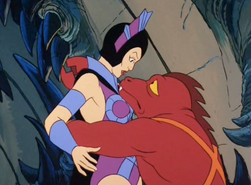 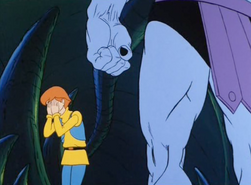 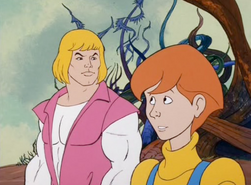 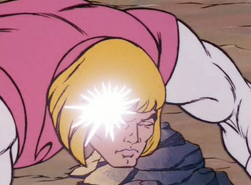 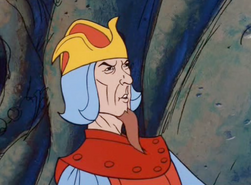 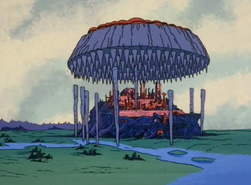 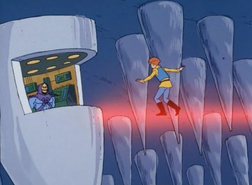 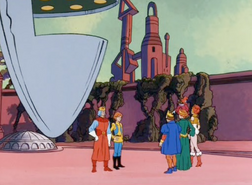 Retrieved from "https://he-man.fandom.com/wiki/Things_That_Go_Bump_in_the_Night?oldid=31017"
Community content is available under CC-BY-SA unless otherwise noted.